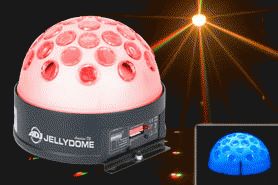 Jellydome – With the introduction of the Jellydome, American DJ continues to build on the success of its revolutionary Jellyfish, a unique LED moonflower in a clear plastic case that acts as a “dual” effect. Like its popular cousin, the new Jellydome features red, green, blue and white LED beams emanating from a transparent see-through case, offering two exciting effects in one: 1) an RGBW LED moonflower, and 2) a glowing color-changing case that is itself part of the light show. As its name suggests, the Jellydome’s case is shaped like a dome, creating a distinctive appearance on the dance floor. The fixture projects 34 sharp beams from one powerful 10W RGBW LED light source, and can produce 7 colors: red, green, blue, purple, yellow, cyan and white. A color strobe effect and 0-100% electronic dimming are included. The Jellydome can be operated in 3 modes: Sound-Active, Master-Slave or DMX-512 (3 channels). Low maintenance and energy efficient, its long-life LED source is rated at 30,000 hours, and it consumes only 27W of electricity at maximum use. Compact and portable, it weighs just 5 lbs. 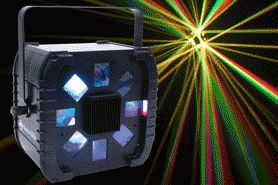 Quad Phase – A high-output LED moonflower effect, the Quad Phase produces 160 razor-sharp color-changing beams that will completely fill a dance floor, ceiling or wall. Powered by a cutting-edge 10W 4-in-1 (red, green, blue, white) LED source, it can produce 13 different colors: red, green, blue, purple, yellow, cyan, white, light red, light green, light blue, light purple, light yellow and light cyan. This versatile effect utilizes a high-quality 1.8° stepper motor and can produce quick accurate movements for high-energy dance music or smooth fluid movements for mood music. It can be operated in 3 modes: Sound-Active, Master-Slave or DMX-512. When operated in Sound-Active or Master-Slave modes, it moves to its own exciting built-in programs. The rear panel features a user-friendly 4-button DMX display, and IEC In/Out to daisy chain power (up to 12 Quad Phase units). Cool running, it can stay on all night with no duty cycles. It consumes only 27W of power maximum, and has a long-life 30,000-hour LED rating. 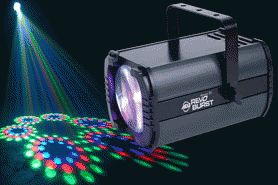 Revo Burst – The newest member of American DJ’s popular Revo Series of LED moonflowers has burst upon the scene – literally. The high-energy Revo Burst features 7 clusters of 42 red, green, blue and white LEDs (294 LED total) that strobe and turn on/off in eye-popping bursts like fireworks on the 4th of July. This oo-ooh and aa-aah evoking display is created by unique programs that have been built into the unit and will kick into gear when it is run in Sound Active or Master-Slave modes. The Revo Burst can also be operated with a DMX-512 controller in choice of two DMX modes: 4-channel or 10-channel. It includes variable-speed color strobing and 0-100% electronic dimming. Featuring a wide 46° beam angle, this highly animated effect can cover a large area, even when hung from a relatively low mounting point. A convenient hanging bracket and safety hook are included. Compact, lightweight and great for mobile entertainers, the Revo Burst is built to last, with no moving parts and a 100,000-hour LED life expectancy. Extremely energy-efficient, it has a maximum power draw of 20W.