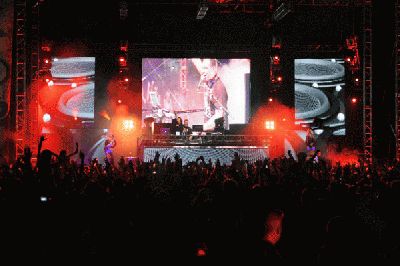 Another reason Sound Wave has been so quick to catch on is its amazing lineup of talent. Promoted by Insomniac Events and Steve LeVine Entertainment (SLE), the most recent October 2011 Sound Wave festival featured headliners Kaskade, Z Trip and Dirty South, plus some two dozen other acts performing on three stages continuously from 4 pm to 2 am.

Then there’s Sound Wave’s impressive visual effects, provided by Creative Backstage (Phoenix, AZ), which handled the festival’s video and stage design. Along with the big name DJs, one of the “stars” of the fall event was a 3D-like LED video screen setup on the main stage, created by John Garberson of Creative Backstage, using EVLED 1024SMD panels from Elation Professional.  Performers could display their own visual effects on the screen, or they could take advantage of ready-made content supplied by Creative Backstage.  “Anytime DJs didn’t have any content, we had media servers with hundreds of different loops and videos ready to go,” said Garberson.

The screen itself was constructed with 107 of the Elation 20mm medium-resolution IP65-rated transparent panels.  Although it was mapped out as one large screen, the 2.2” x 2.2” LED panels were actually configured in three different layers.  “We knew it would be costly to do one solid screen all the way from 40’.  So we broke it up into sections, knowing that mapping it all together, when you stand out in the crowd the eye’s going to pick it up like one image,” Garberson explained.

The first layer of the screen consisted of a 4’ x 14’ section in front of the DJ booth.  Approximately twelve feet behind that was the second layer, comprised of two 6’x 6’ screens on either side of the front panels, set up from the ground level.  Six feet behind that were the largest LED screens, which were divided into three sections: a 10’ x 14’ in the center, which utilized 35 EVLED panels; and two 10’ x 8’ screens on the sides, consisting of 20 panels each.

Although this three-layer design was born somewhat of necessity, it ended up making quite a “splash” on the wave pool stage. “The three different levels created a unique look,” said Garberson.  “When you walked toward on side of the stage, it gave a kind of three-dimensional look to the stage.  Between each screen we flew truss with all the lighting and strobes, so the lighting looked like it was added right into the video.”

Sound Wave’s promoters were very impressed with the LED screen too.  “I thought the screens looked amazing,” said Matt Brough, Talent Manager for Steve LeVine Entertainment.  “They were the focal point on the stage, other than the DJ.  And certainly during Z Trip’s set, the LED screens brought his stage show right to the audience.  It felt like you were right next to him.”

Garberson, who began offering LED video screen services in January 2010, said that there are a number of features about the Elation EVLED 1024SMD panel that make it a perfect fit for Creative Backstage and its clients.  One is its very affordable price.  “I had looked at LED screens years before, but they were way too expensive,” he recalled. “Then when my Elation rep Kraig Knight (PLSP Inc.) stopped in and started talking about their EVLED product, the numbers made sense for a smaller company like me.

“But it wasn’t just the cost,” added Garberson, “it was the whole product.  Being a 20 mm screen, it was between high-res and low-res.  You don’t have to be too far away to see it, but at the same time most of our shows are more than 30’ away, so it worked perfectly. At 20 lbs apiece, the panels are easy to transport and set up.  And being IP65 rated, they can be rained on.”

Garberson experienced the benefits of this latter feature at the first Sound Wave in April 2011, when a freak storm moved in during the entire set-up period and day of the festival.  “We waited until the morning of the show to set up, because it rained the whole night before.  But it didn’t clear up, so we were forced to set up in the rain. My clients were concerned about whether the video would work, and I assured them that it definitely would. We fired the system up, did some tweaking, and we were off and running. It stayed raining through the entire event, and the EVLED screen ran perfectly.”