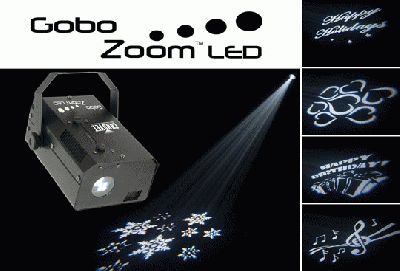 CHAUVET®, a leading manufacturer of LED lighting, announces the perfect accessory piece for any mobile entertainer, DJ, special event or retail environment, the Gobo Zoom™ LED. It’s a super-compact gobo projector featuring a unique manual zoom function that’s perfect for short-throw or long-throw applications. It’s illuminated by one white 10 W LED and runs much cooler than units using a conventional light source. This means it has no duty cycle as LED-based projectors can run all night long.

Gobo Zoom™ LED comes with a four color gels and eight metal gobos to complement a variety of events. Or you can print your own custom gobos on transparency film. Its gobo holder can be easily accessed for quick, tool-free changes—which makes creating and displaying custom gobos for any event a breeze.  The eight included gobos are described as either text-based gobos, like ‘Happy Birthday’, ‘Happy Holidays’, ‘Congratulations’, or image-based gobos, such as hearts, musical notes, stars, happy couple dancing and snowflakes.

The fixture can be controlled by two channels of DMX or has stand-alone operation that allows you to control the rotation and speed without DMX.  It has a zoom angle of 22-38 degrees and weighs just over four pounds.