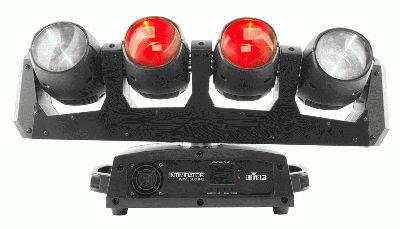 With its stunning, moving, razor-sharp beams shooting upward into the air, the new Intimidator Wave 360 IRC will make waves at any event.  This unique array fixture from CHAUVET DJ features four tilting RGBW heads mounted on a single rotating base to produce a breathtaking non-stop visual ride that is unlike any other aerial effect.

Each of the Intimidator Wave 360 IRC’s heads is powered by a 12-watt Quad-Color (red, green, blue, white) LED with a narrow 5° beam angle, creating intensely bright, tightly focused aerial beams.  Each of the four tilting heads is also independently controllable which, combined with the continuous pan rotation of the base, propels the array’s sharp, colorful beams to constantly move around the room, cutting through the air like knives, for an astonishing aerial lightshow that truly stands out from the pack.

Both the pan and tilt angles on the Intimidator Wave 360 IRC are fully adjustable (pan 540°, 360° or 180°; tilt 270°, 180° or 90°).  This adjustability offers the advantage of allowing the effects to be directed within a desired area to accommodate rooms and spaces of varying sizes.

Users also have the flexibility to create an infinite spectrum of beam colors with the Intimidator Wave 360 IRC’s 4-in-1 RGBW LEDs. Selection of beam colors can be done via a DMX controller, with the unit offering the options of either  17 or 33 DMX channel operation

For those who prefer not to use DMX, the Intimidator Wave 360 IRC makes it easy to put on a dramatic aerial lightshow manually.  The array is equipped with built-in movement macros and color programs that can create complex looks without requiring any knowledge of DMX.  An easy-to-use full-color menu interface makes manual operation simple and self-explanatory.

The Intimidator Wave 360 IRC is ideal for DJs, bands, mobile entertainers and event producers who want to astound audiences with a bombardment of shooting aerial beam effects. “Narrow-beam aerial effects are very popular today,” said Allan Reiss, Senior Product Manager for CHAUVET DJ.  “The Intimidator Wave 360 IRC brings a new twist to this trend by combining four tilting heads with a base that itself rotates. What you get is an aerial effect that looks like a Fourth of July fireworks display in constant motion, yet it’s all coming from a single unit.  You really have to see this very unique effect in action, and when you do, you’ll be amazed.”

More sweeping, large coverage lightshows can be created by linking together multiple Intimidator Wave 360 IRC fixtures.  Up to four units can be linked in automatic, sound-active or Master-Slave mode – for a spectacular aerial display of 16 moving heads in all!