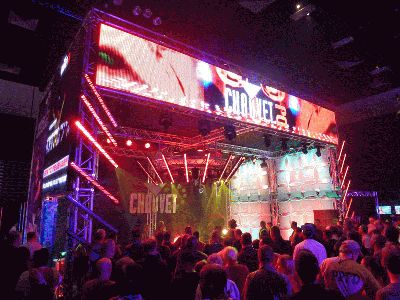 To provide a completely wireless lighting solution, Obey™ 4 D-Fi 2.4GHz combines two popular control products into one, easy-to-use controller. A huge hit among attendees and the perfect complement to the Freedom™ series of 100 percent true wireless fixtures, this controller allows you to control an entire lighting system around a ballroom without ever running a single DMX cable. For color mixing or selecting pre-mixed colors, connect any 4-channel LED fixture and set your desired color simply by pressing a button.

Geyser™ makes a bold statement and kept attendees flocking to the booth to see it in action. As an effect light and fogger in one unit, it produces intense explosions of color, fog and light. This powerful fogger blasts a vertical stream of safe, water-based fog, while simultaneously illuminating the bursts with 21 high-power, three-watt LEDs. A combination of red, green and blue LEDs allow for easy color mixing.