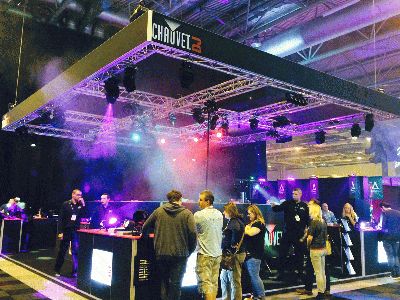 As the multitude of DJs and lighting designers settle into normality once again after this year’s hugely energetic BPM show, held at Birmingham’s NEC from 12-14 September, CHAUVET DJ has been reflecting upon what is quite arguably its most successful outing at the show to date.

“Although we’ve been regular exhibitors at BPM for several years now, given that we’re celebrating CHAUVET’s 25th anniversary, this year was extremely important for us,” said CHAUVET General Manager for Europe, Michael Brooksbank. “To mark this momentous milestone, we really pulled out all the stops, and it paid off… The guests were absolutely enthralled by our new products.”

Some 10,000 visitors were treated to no less than five new CHAUVET DJ product launches: the D-Fi USB series, the Intimidator Trio, the Swarm 4 FX and the COREpar 40, 80 and UV USB series.

One of the products arousing significant interest on the stand was CHAUVET DJ’s new D-Fi USB series. Powered via a standard USB connection, these lighting fixtures - ranging from low-profile LED pars and COB (Chip-on-Board) colour washes, to a gobo projector, LED strobe and simulated water effect - all are controllable with a revolutionary thumb-drive-sized D-Fi USB transceiver, the D-Fi USB. As the fixtures can connect to CHAUVET DJ’s new D-Fi USB transceiver (which eliminates the need for any DMX cables), significant interest was stirred up with both budding DJ lighting designers and more experienced veterans looking to incorporate new technological gadgets into their show setups.

Long-term CHAUVET followers were pleased to see a new addition to CHAUVET DJ’s classic Intimidator range of moving heads, the Intimidator Trio. Building on the pedigree of CHAUVET DJ’s much loved Intimidator series, the Trio’s innovative LED-powered moving head features no less than three lights with beam, wash and effects in one affordable package. With the fixture’s motorised zoom allowing for seamless change from narrow beam to wide wash, many passersby were charmed by the lure of this innovative triplet fixture.

Another product drawing in the crowds was the Swarm 4 FX, a 3-in-1 LED effect light combining red and green lasers, white strobe effects and RGBAW rotating derby effects. With separate colour and programme control, DJs complimented the fixture’s ability to customise the look and effect of any show. The Swarm 4 FX is also capable of creating a synchronised light show by power linking to multiple units.

“BPM will continue to be an important show for CHAUVET DJ as it allows us to interact directly with our customers,” said Brooksbank. He concluded: “After having received such positive feedback this year from DJs the world over, we have full confidence both in our selection of products, and the BPM show. Roll on next year!”