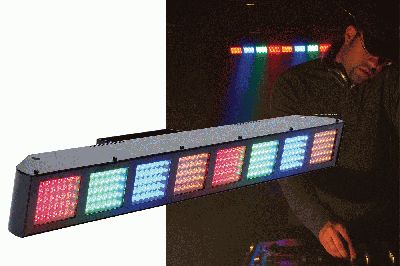 Now featuring 8 colored LED banks – two banks each of red, green, blue and amber –  the Color Burst 8 DMX is twice as long (2-1/2 feet) and has twice has many LED lamps (280) as the original. Equipped with built-in high-energy programs, this easy-to-use, affordable LED bar will produce thrilling, eye-popping color chases to the beat of the music, making it great for DJs, bands, clubs and bars who want to liven up their gig or venue with a burst of color.

The Color Burst 8 DMX isn’t only bigger than its predecessor, it’s also got added features: DMX control, a strobe effect and 0-100% electronic dimming. These professional tools make the Color Burst 8 DMX even more exciting and versatile, allowing users to add color strobe and color fade effects and create their own programs via a DMX controller.   Operating on 3 DMX channels, the unit features a 4–button LED display menu system that makes it easy to navigate through DMX settings.

But you don’t need a DMX controller to unleash the Color Burst 8 DMX’s amazing color chasing effects. For users who want total ease of operation, the LED bar can be run in Sound-Active mode as a simple plug-and-play effect, moving and chasing to its own internal programs. Another easy way to run the Color Burst 8 DMX is with American DJ’s optional universal UC3 remote controller (sold separately), which gives fingertip control over basic functions like Blackout and Program Selection. For those seeking bigtime drama, multiple Color Burst 8 DMX units can be linked together Master-Slave to produce coordinated color washes and chase effects over a large area.

“When it comes to club lighting effects, bigger is often better, which is why we developed the Color Burst 8 DMX,” said Scott Davies, General Manager of the American DJ Group of Companies. “Our original RGB+A color wash bar, the Color Burst LED, has been very popular, so we wanted to take it to the next level and come out with a larger, more featured version. But at the same time, we wanted to keep the easy-operation and affordability that made the original so well-liked by working DJs, mobile entertainers, bands and small clubs. The new Color Burst 8 DMX delivers the best of both worlds.”

The Color Burst 8 DMX also delivers the same LED technology-driven benefits as its predecessor, including a cool operating temperature, which allows it to run all night without shutting down for duty cycles. Additionally, its LED bulbs have an extremely long life – 100,000 hours – which virtually eliminates the hassle and expense of lamp replacement. Its LEDs also offer the advantage of being very energy efficient, consuming just 25W of electricity maximum at full use.

Although it’s bigger than its predecessor, the Color Burst 8 DMX is still very lightweight and portable, weighing just 5 lbs./2.2 kg, making it ideal for mobile use. It measures 28.25”L x 3”W x 5”H/16 x 72 x 127 mm. The unit comes with a hanging bracket and can be hung either horizontally or vertically, so it can fit into a variety of spaces and applications.