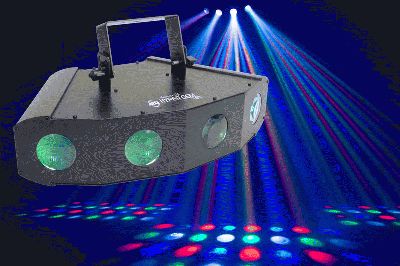 It’s been called a “moonflower on steroids.” And with 256 red, green, blue and white LEDs shooting out beams through 4 lenses, American DJ’s new Hyper Gem LED is definitely a “performance-enhanced” special effect.

A 4-way DMX-controllable portable moonflower, the Hyper Gem LED will quickly hype up the excitement level at any club or disco, with a wide sweep of unique LED patterns that gyrate and groove to the beat of the music. Featuring 4 separate lenses and a 24° high and 94° wide beam angle, its sharp, brilliant beams will completely cover the dance floor at a mid-sized venue, making it an ideal effect for any DJ, entertainer or club who wants to blast out a frenzied light show over a large area. Great for projecting on walls and ceilings too, the Hyper Gem LED includes a multi-color Strobe Effect that adds to its eye-popping flash.

“Because it has four different-angled lenses, the Hyper Gem LED actually looks like four moonflower effects in one. So it creates an amazing amount of visual movement and excitement,” said Scott Davies, General Manager of the American DJ Group of Companies. “Many people remember the original ‘Gem’ as being one of American DJ’s classic moonflower effects. Well --- as its name suggests -- the Hyper Gem LED is a ‘hyper,’ wired version of this best-selling standard.”

The other part of its name, “LED,” attests to the fixture’s durability and ease of use – another evolution from its original namesake. Using long-life 100,000-hour-rated LEDs as its light source and having no moving parts, the Hyper Gem LED is built to last and virtually maintenance-free. Plus, since LEDs run at a much cooler temperature than conventional lamps, the unit can stay on all night without shutting down for duty cycles, and there’s no waiting for it to cool down at the end of a gig – entertainers can just pack it up and go!

The Hyper Gem LED is also easy to operate, even for users with very little lighting experience. You can just plug it in and turn it on, and it will run as a sound-activated effect to its own exciting built-in programs. What’s more, up to 16 Hyper Gem LED units can be linked together Master-Slave via 3-pin XLR cable, for a multi-fixture sound-active synchronized light show. Another easy control option is to use American DJ’s compatible UC3 remote controller (sold separately), which provides fingertip command over basic functions like Blackout, Strobe and Program Selection. More experienced operators who wish to create their own custom light show can program the Hyper Gem LED with any standard DMX-512 controller, such as American DJ’s DMX Operator. The unit can be operated in 2 DMX modes – 4-channel or 256-channel – and it features a convenient 4-buttom LED display on the rear panel for easy scrolling through DMX settings.

Although it’ll step up the excitement wherever it goes, one thing the Hyper Gem LED won’t hype up are electricity bills. Thanks to the efficiency of its LEDs, the unit draws a mere 32W of power at maximum use, saving energy and money and allowing more units to be hooked up on a single circuit.