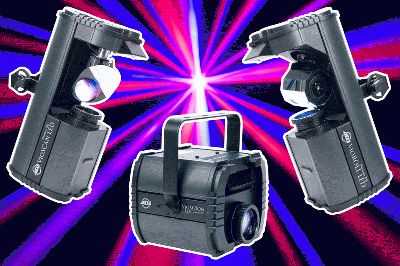 With 10 watts of LED power shooting out red, green, blue and white beams so bright, they rival the Aurora Borealis in intensity, American DJs new Vio Series fixtures have been called “moonflowers on steroids.” That’s because these bold new DMX club effects -- the VioMOON LED, VioSCAN LED and VioROLL LED – put on a performance-enhanced light show that fills a room or dance floor with a powerful output that goes far beyond the brightness associated with a typical moonflower.

The secret behind the Vio Series moonflowers’ strength and intensity is American DJ’s exclusive new Quad LED lamp technology. Each of the three fixtures is powered by a huge, high-output 10-watt homogenized LED source that’s comprised of 4 different color LEDs (red, green, blue and white) in one lamp. This big, brawny LED produces dozens of ultra-bright RGBW beams that weave and gyrate around the dance floor to exciting built-in programs, or in customized patterns that you can create using any standard DMX controller.

All of the Vio Series fixtures share in common this revved-up moonflower performance. Where the three units differ is that the VioMOON LED is a classic moonflower effect, while the other two are scanners with X-Y movement -- the VioSCAN LED featuring a flat scanning mirror, and the VioROLL LED utilizing a barrel mirror to produce tunnel-shaped beams.

“We designed the Vio Series for clubs, bands and mobile entertainers who want a higher output moonflower effect,” said Scott Davies, General Manager of the American DJ Group of Companies. “This increased output is the result of our new 10W Quad LED technology. The LED lamp is bigger and more powerful, plus it features our new 4-color homogenized design. With the Vio moonflowers, you get a lot of bang for the buck.”

Not only are the Vio Series moonflowers ultra-bright, they’re also very low on maintenance. Their long-running LEDs are rated at 30,000 hours, so they rarely need replacing. The lamps generate very little heat, so the fixtures can stay on all night without shutting down for duty cycles, and they can be packed up right away after a gig.

The Vio moonflowers also offer a lot of premium features not typically found on units in their price range, such as: 1.8° stepper motors with microstepping for smooth, accurate movements; a 4-button menu display for easy navigation through DMX settings; and IEC AC In/Out on the rear to daisy chain power. Additionally, they include 0-100% Dimming, a Strobe Effect and a Manual Focus. All also offer the convenience of being able to be operated as remote units, since they are compatible with American DJs universal UC3 easy-to-use remote controllers (sold separately).

Other operating options for the Vio Series moonflowers include: DMX, Sound Active and Master/Slave. When in Sound Active Mode, the units will run to their own built-in programs for an easy plug-and-play light show. When four VioSCAN LED or VioROLL LED units are linked together Master/Slave, they feature a Pan/Tilt Inversion Mode – scanners 1 and 3 will sync opposite scanners 2 and 4, giving the look of a programmed light show.

The Vio Series moonflowers feature multi-voltage operation: AC100V-240V, 50/60Hz (IEC socket). They come with a hanging bracket that includes a safety hook for secure mounting. All units are compact and lightweight, making them great for mobile use.