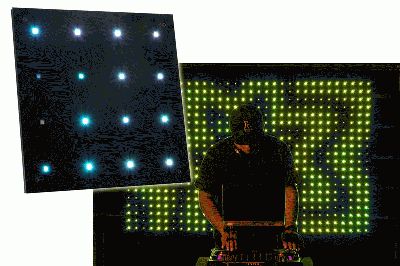 Now any DJ or nightclub can put some video flash in their act with the new Flash Panel 16 from American DJ. An affordable LED screen solution for mobile entertainers, the Flash Panel 16 is a square-shaped panel with 16 RGB pixels that can be controlled individually via DMX to create dynamic colorful effects, chases, images, text-- or any other visual element -- that a club or DJ wants to display.

Lightweight and easy to use, the Flash Panel 16 can be linked in multiples to form a video screen of any size. However big or small, it will be the video star of any venue, allowing you to “broadcast” custom graphics, messages and marquees such as club logos or birthday or wedding greetings. Mix them up with eye-popping color changing effects, rotating geometric patterns, free-form objects, and moving matrixes that chase to the music – the visuals are limited only by your imagination!

No matter what’s on screen, the Flash Panel 16 will energize your show with the high-charged power of video, giving it tremendously more impact and excitement. “The Flash Panel 16 was designed to make it easy and affordable for DJs, mobile entertainers and neighborhood clubs to become part of the video trend that’s occurring in the entertainment industry,” said Scott Davies, General Manager of the American DJ Group of Companies.

“Think of it -- you can’t turn on a music-oriented TV show, attend a concert or visit a major nightclub without seeing video screens everywhere. The Flash Panel 16 gives the smaller club or entertainer a way to add the glamour and excitement of video to their show without going to great expense or having to be a high-tech engineer. And when you make video a part of your services, it adds more value and professionalism, and allows you to command a higher fee per gig,” Davies pointed out.

Compact and easy to assemble, the Flash Panel 16 includes 3-pin XLR, DMX input/output connectors, along with standard IEC connectors to link panels to each other. Each panel measures 9.8”L x 9.8”W x 1.85”H/ 250x250x47mm and weighs just 3 lbs. /1.4 kg., making the system easily transportable and great for entertainers on the go.

The Flash Panel 16 can be controlled by any universal DMX-512 controller (48 DMX channels per panel) or via an optional CF card controller (Model: FP CFC). Recommended software control systems for the Flash Panel 16 include (sold separately): MyDMX from American DJ; CompuLive from Elation Professional; and the new MADRIX NEO from American DJ, which can create 100% light show synchronization by analyzing music in real time. As another easy option, the Flash Panel 16 can be operated as a stand-alone unit via convenient dipswitches on the rear panel, which can also be used for DMX addressing.

Featuring a resolution of 16 pixels per meter, each panel comes with a white diffusion cover that can be attached to give it a different look – so you actually get 2 effects in one! A hanging bracket is also included with each unit.