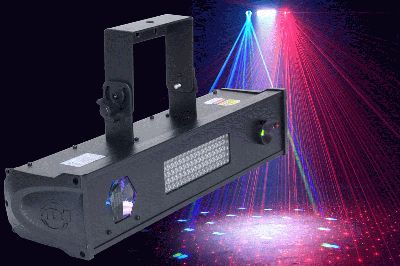 Sometimes it’s hard to make a decision. American DJ doesn’t think you should have to – at least not when it comes to buying lighting effects.  Rather than forcing  DJs, clubs and entertainers to make the difficult choice between an eye-popping tri-color LED moonflower, an awe-inspiring red and green laser, or a mesmerizing white strobe, ADJ is bringing you all three of these effects in one convenient, affordable unit: the new Fusion FX Bar 5.

The latest addition to ADJ’s Fusion Series of multi-effects fixtures, the Fusion FX Bar 5 combines some of today’s most advanced, cutting-edge lighting technologies in one compact bar-shaped fixture that will instantly electrify any party or nightclub. And with a much lower price than the cost of buying three such effects individually, the Fusion FX Bar 5 is also exciting news for DJs’ and entertainers’ wallets!

One of Fusion FX Bar 5’s three effects is a TRI Color LED Moonflower, which showers the dance floor with colorful beams and patterns produced by a high-output 3-watt LED lamp. The lamp features ADJ’s revolutionary TRI LED Technology, in which red, green and blue LEDs are combined into one tri-color lamp source for superior, smoothly blended colors. This vibrant effect is sure to set the night aglow in moonflower madness as its beams sweep around the room in smooth, fluid movements, driven by high-quality 1.8° stepper motors.

laser.  Modeled after ADJ’s popular Galaxian Series of laser effects, it produces over 500 red and green laser beams that create the stunning impression of a galaxy of stars in a solar system when projected overhead on the ceiling. Both its 30mW green and 80mW red laser diode are FDA approved, ensuring that this glowing galaxy can be taken anywhere safely.

Rounding out the Fusion FX Bar 5’s trilogy of effects is a bright white LED strobe/wash that’s powered by 90 white 5mm LEDs. Whether used as a pulsating strobe or simply lighting up a stage or walls as a brilliant wash, this dazzling white-lightning effect will add impact to any venue or performance.

“Everyone wants to get more for their money today, and with our Fusion Series we have responded to this demand by giving customers multiple lighting effects at a ‘single-fixture’ price,” said Scott Davies, general manager of the American DJ Group of Companies.  “Our newest addition to the Fusion family, the Fusion FX Bar 5, is one of the most exciting, because its three effects all utilize very cutting-edge technologies, such as TRI Color LEDs.  This fixture also contains a large number of professional features, which adds to its tremendous value.”

One of these professional features is the ability to select from 3 operating modes: DMX, Sound Active or Master/Slave.  Operating on 7 DMX channels, the Fusion FX Bar 5 features 0-100% Dimming for its strobe and moonflower effects when used in DMX Mode.  A 4-button digital display on the rear of the unit makes it easy to navigate through DMX settings.

When set in Sound Active Mode, the unit will run to its own internal programs to the beat of the music.  Equipped with both in/out DMX connections and In/Out IEC power connectors, the Fusion FX Bar 5 can easily be linked together in multiples and run Master/Slave.  As another control option, the Fusion FX Bar 5 is compatible with American DJ’s universal UC3 Controller (sold separately) for easy remote operation.

Not only does the Fusion FX Bar 5 save you money by offering “three effects in one,” its LED technology also cuts down on maintenance and operating costs.  Its LED lamps have a long operating life of 50,000 hours, and it consumes a mere 32 watts of electricity.  Another bonus of the Fusion FX Bar 5’s LEDs is their cool operating temperature, which allows the unit to be run all night with no on-off duty cycles, and lets you pack up right after the show without having to wait for a cool-down period.