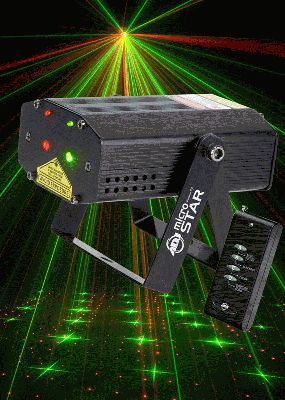 Building on the success of its compact, easy-to-operate and highly affordable Micro Galaxian green and red laser fixture, American DJ has launched two new small, but powerful solar-system type laser effects – the Micro Star and Micro Gobo. Each emitting over 200 bright red and green laser beams, the two pint-sized powerhouses are ideal for mobile entertainers who want to present a cutting-edge celestial laser light show at smaller venues -- even if you’re “galaxies” away from being a lighting expert yourself!

We had tremendous success with our Micro Galaxian

With the Micro Star and Micro Gobo, any mobile DJ, weekend warrior band or even home party host can easily and safely use laser effects and become the star of the show. Both Micro effects weigh just 2 lbs/0.6 kg and measure a diminutive 2” x 4.75” x 3.5”/50 x 120 x 90mm. They comply with all FDA standards, which allow you to safely use the effects in any entertainment venue or party you wish. A UL-listed multi-power supply (AC 100-240V, 50/60 Hz) allows a mobile entertainer to take the units on the go anywhere his or her laser-like focus may take them.
Want your party guests to literally see stars? The Micro Star will do that. It produces more than 200 green and red laser beams with star patterns. DJs can project the laser beams on to a ceiling, wall or dance floor.
How about out-of-this world gobo patterns? The Micro Gobo is just the ticket. It delivers more than 200 green and red laser beams with gobo patterns. 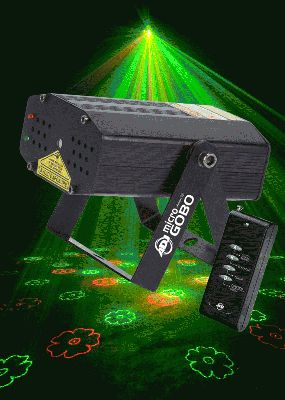 Best of all, operating the Micro effects are as simple as turning on your TV. Even a lighting newcomer can easily call the shots for the Micro Star and Micro Gobo. All you need to do is plug in the effects, grab hold of the included RF wireless remote control and run the laser’s built-in programs in Auto or Sound Active modes. The remote gives you control over the Mode, Blackout, Rotation, Color Change (Red, Green, Red+Green or Random) and a plethora of other awesome features.
“We had tremendous success with our Micro Galaxian,” said Scott Davies, General Manager of the American DJ Group of Companies. “People who never before used laser effects because they were too expensive or complicated really loved the idea of a compact, affordable laser that you could run with the push of a remote button.

“So we wanted to add to the excitement with the Micro Star and Micro Gobo. Designed for mobile entertainers who want to get a party started in a small venue or a private event, the effects are small and easy to use, but they don’t hold back on performance. The Micro Star and Micro Gobo pack the same punch any larger laser would. There’s no doubt these effects will wow any audience.”

The effects aren’t the only things that are “micro.” So is your electric bill after operating them. The laser effects consume just 9 watts of power at maximum use. Both effects are powered by a 30mW green laser and an 80mW red laser. The Micro Star and Micro Gobo come with a dual hanging bracket, allowing a DJ to hang the effects from a wall or ceiling, if desired. Although the action is sure to percolate, you can rest assured the Micro Star and Micro Gobo’s included fans will keep both cool at all times.