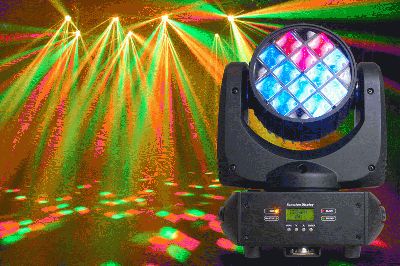 As a classic element of lightshows for mobile DJ set-ups, small clubs and bars, the moonflower effect remains popular with users and audiences alike – and ADJ’s Vortex 1200 is a unique, updated version. With the Vortex 1200 moving head, ADJ has given a modern twist to one of the industry’s most prevalent effects using quad-color LED technology and incorporating a unique range of lightshow-enhancing movements.

The Vortex 1200 is a powerful LED moving-head, with a Moonflower style effect, which uses a 16-piece lens kit and twelve 10W RGBW quad-color LEDs to create a mesmerizing maelstrom of color. Perhaps the most unique aspect of the product is its infinite 360-degree rotation and exclusive clockwise/counter-clockwise mirror movement, which, combined with the quad-color LED powered moonflower effect, results in an explosion of color and hundreds of beams of light. This versatility in movement allows the fixture’s hypnotic shapes to twerk in and out, resulting in kaleidoscopic effects as the traditional Moonflower shape bursts open into vibrant atoms of pure lighting excitement.

For further lighting enhancement, users can activate the electronic strobe effect as well as a random strobe effect mode, which offers slow-to-fast random strobing. Mounted on a moving yoke, this incredible effect is then taken to another level, allowing the colorful assault of beams to move around or be pointed in any direction, enhancing the energy created. These incredible effects can be utilized for an array of functions; creating pure lighting excitement on club dance-floors, as part of mobile DJ setups, in live music venues, and for stage productions or events, while bringing a professional, new look to any lightshow.

Users have three operational modes to choose from – Sound Active, Show Mode and DMX Controlled – and, when in DMX Controlled mode, the option of four DMX channel modes: 14, 15, 17, or 29. While in Sound Active or Show Mode, the fixture is also compatible with the (separately sold) UC3 family of controllers, offering user-friendly operation and allowing control over various aspects of this unique product’s captivating effects – including control over the shutter and rotation speed. Lightshows can be enhanced even further thanks to the Pan/Tilt Inverse Mode which allows for contrasting movements when multiple fixtures are linked together in Master/Slave mode; creating a mesmerizing symmetrical lightshow which looks professional without the hassle of technical and often time-consuming DMX programming.

On the other hand, for advanced users looking to incorporate the Vortex 1200’s unique effects into a larger DMX lightshow, 23 built-in color macros are provided to aid with programming. With 16-bit fine pan/tilt, due to effective micro stepping capabilities, the Vortex 1200 also offers fluidity of movement and gives users increased control over positioning via DMX allowing incredibly programmed lightshows to be created.

ADJ hasn’t just thought about super-effective lighting effects when creating the Vortex 1200, it has thought about the practicality of the product too; bearing the needs of the mobile entertainer, event organizer and the small club owner in mind. The unit is compact and easy-to-use; being only 1ft tall it’s easy to transport and mount as part of a mobile entertainment service or as a fixed unit in a club or small venue.

Professional PowerCon input and output connections on the rear panel allow for the daisy chaining of multiple fixtures – users can power up to four Vortex 1200s from a single supply at 120V, or – if operating in Europe – eight units at 230V. The fixture is also supplied with an Omega bracket for hanging from trussing and, weighing a very manageable 16 lbs. (7.3 kgs), it is easy to transport and rig.

“The Moonflower is a long used effect and one of the most favored in the industry,” said Alfred Gonzales, national sales manager of ADJ USA. “We just wanted to enhance its effects and let people add something new to their lightshow, and by incorporating quad-color LED technology and a unique infinitely rotating head we’ve achieved our goals. During the process of development, we also made the fixture extremely compact and can offer users improved control thanks to its compatibility with ADJ UC3 controllers – it’s perfect for small nightclubs, mobile entertainers and even stage productions.”