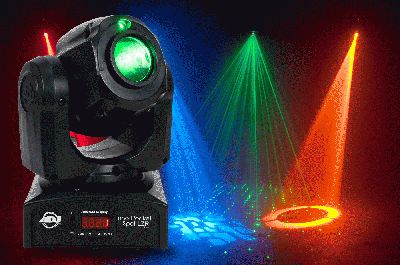 Harnessing all the best features of the original Pocket Spot, ADJ’s unbelievable new Inno Pocket Spot LZR adds a powerful green laser to the mix, giving users the ability to bring the dance-floor to life with two-in-one effects from one portable fixture.

The next generation of ADJ’s popular Pocket Series is finally here. Offering the same awesome compact beam effects as the original Pocket Spot but with the added benefit of a high-power green laser, the game-changing new Inno Pocket Spot LZR lets users take laser-infused two-in-one beam effects with them wherever they go.

The Inno Pocket Spot LZR is as versatile as its predecessor, enabling users to create widespread lighting displays thanks to its flexible 540-degree pan and 230-degree tilt movement. When using multiple LZR units, these displays can also be inverted using the Pan/Tilt Inversion mode, which allows mobile DJs, lighting designers and other users to generate a symmetrical lightshow, working especially well when the fixtures are mounted to truss totems on either side of the booth or stage. Combined with a tight 13-degree beam angle, the Inno Pocket Spot LZR’s movement ensures that cutting beams of light can be sent hurtling through the air for a mesmeric, high-energy display that can be complemented with fog and haze.

As an upgrade of the hugely popular Inno Pocket Spot, the LZR retains a number of its best-loved features, including separate color and GOBO wheels, manual focus and a series of attention-grabbing built-in shows.

The color wheels lets users choose from seven colors – red, orange, yellow, green, UV purple, blue and pink – plus white, as well as giving them the freedom to create breath-taking split-color beam effects for a display that really pops! The separate GOBO wheel, meanwhile, offers seven fixed GOBO patterns, plus spot, as well as GOBO Shake and Scroll features for further enhancing the patterns. So, whether users want to fill the dance-floor with distinctive patterns or use the open GOBO to spot tables, wedding cakes and other event features, they can keep things diverse.

In terms of control, ADJ has designed the new Inno Pocket Spot LZR with three operational modes: DMX-Controlled, Sound Active and Internal Show. Using the Sound Active and Internal Show settings, users can generate a series of simple but effective displays, selecting from four exhilarating built-in shows and using the sound-to-light feature to ensure that they match the music they’re playing. The Inno Pocket Spot LZR is also compatible with ADJ’s separately sold UC IR remote and Airstream IR app, the latter of which enables dynamic control directly from the user’s iOS device!

On the other hand, for those wanting to produce something truly special, customized to the tastes or requirements of their clients and audiences, the DMX-Controlled mode offers 13-, 14- and 16-channel settings. This grants users control over everything from fine pan/tilt movement to laser rotation to GOBO/color selection, for in-depth programing and incredible results.

These displays of pure lighting excitement – whether simple or complex – can then be heightened thanks to ADJ’s inclusion of pulse and strobe effects, creating a more intense, club-style atmosphere for when mobile DJs and small club owners want to really get the party started. The brightness of these strobe effects can also be intensified or subdued easily using the 0-100% dimming, while five selectable dim curves make the Inno Pocket Spot LZR adaptable to a wider range of venues and situations.

No matter how or where users decide to put the Inno Pocket Spot LZR to use, its low weight (7lbs) and compact measurements (6.25 x 5.75 x 10.5in) make it a portable, easily manageable addition to any lightshow, whether mobile or an install for a small club or bar. With an Omega bracket also included, it’s easy to hang the moving head from trussing, allowing mid-air beams, laser clusters and colorful GOBOs patterns to be created down on the dance-floor.

Mini moving heads don’t get much more versatile than this! The Inno Pocket Spot LZR boasts all the popular features of the original Pocket Spot, but with the next-generation benefits of a high-power green cluster laser, offering mobile DJs, club/bar owners and event organizers the ideal compact fixture for use in smaller venues. Flexible, powerful but portable enough to pack into the trunk, the Inno Pocket Spot LZR provides two-in-one effects from one compact unit, without the high price tag.