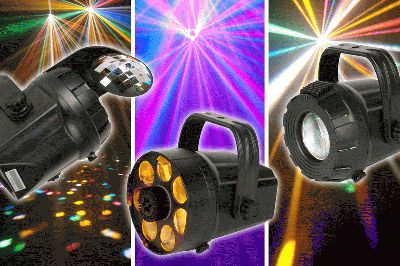 ADJ Products is giving DJs and party hosts the tools to “micro” manage a dazzling multi-fixture light show. The company has introduced the Micro LED Series, a collection of three colorful high-energy LED-powered moonflower-type effects that weigh just 2 pounds (0.7 kg.) each and are less than a foot (304.8mm) in length: the Micro Phase, Micro Burst and Micro Moon.

Pint-sized yet powerful, the Micro LED Series effects are ideal for DJs and mobile entertainers who need a smaller rig that’s lightweight and portable, yet still want to create the electrifying impression of a multi-effects light show.  The fixtures’ ultra-compact size also makes them great for less-spacious establishments such as neighborhood clubs, karaoke bars, pool halls and bowling centers. And because the Micro Phase, Micro Burst and Micro Moon can be operated simply as plug-n-play units, they allow home users and other non-entertainment pros to join one of today’s hottest trends by spicing up their parties, school dances and special events with colorful LED lighting effects.

The three fixtures in the ADJ Micro LED Series look great together, but they can also be used independently of one another.  They include:

Extremely easy to operate, all Micro LED Series models feature a built-in microphone for Sound Active operation, propelling their beams to automatically move to the beat of the music.  The fixtures also include an FX Knob, giving users the added options of setting the unit in static mode, as well as in clockwise or counterclockwise rotation. Thanks to their LED lamp source, the Micro Phase, Micro Burst and Micro Moon are cool-running effects so they offer the added convenience of being able to run all night without shutting down for duty cycles.

“We developed the Micro LED Series to meet the growing demand for scaled-down, easy-to-use LED effects among working DJs, small clubs and non-pros,” said Alfred Gonzales, national sales manager for ADJ Products.  “Our mission at ADJ has always been to offer high-quality reliable products to all segments of the club/DJ/entertainment market, whether it’s intelligent moving heads and scanners like those in our Vizi and Inno Series, or affordable plug-n-play effects geared toward non-lighting pros. The latter customer group continues to be a very important market for us -- as lighting is being used at more parties and events -- which is why we introduced the new Micro LED Series.”