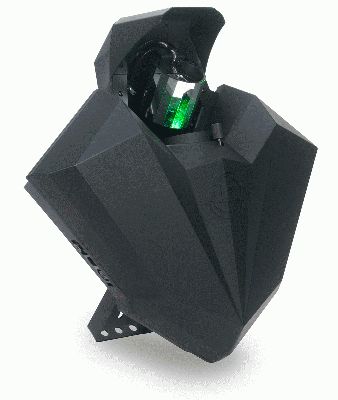 This stunning new fixture projects color/GOBO effects onto its internal rotating multi-faceted reflector to generate a moonflower effect. This effect is then projected onto an external mirror barrel, allowing users to create multiple moonflower effects that also tilt and spin continuously, thanks to 360-degree rotation, resulting in an eye-catching multi-beam lighting display that brings color and movement to every corner of a venue. 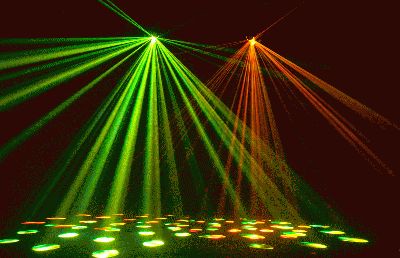 In addition to its uniquely energetic movement, users will also find that the Warlock’s incredibly powerful (and eco-friendly) Philips Platinum MSD 2R source offers unbelievable levels of brightness, ensuring that the fixture’s spiraling moonflower effects grab their audience’s attention and don’t let go! Not only are the effects super-bright, but the unit’s concise 28-degree beam angle ensures tight, cutting beams that look incredible as they slice through fog and haze above the dance-floor.

The Warlock’s mesmeric moonflower effects are created using a combination of separate color and GOBO wheels. The 12 GOBO patterns (plus spot) can be projected down onto the dance-floor or up onto the ceiling, creating pure lighting excitement for audiences as they watch the patterns change and move, enhanced by the fixture’s GOBO shake and GOBO scroll features. The color wheel, meanwhile, holds 12 colors (plus white), allowing users to generate spinning moonflower effects and slicing beams in a range of vivid, attention-grabbing colors. Users can even use the split-color feature to create hypnotic multicolor effects.

Of course, the Warlock doesn’t just bring unique colored GOBO effects to the user’s lightshow, but remarkable movement too. The fixture’s internal rotating reflector, combined with the 180-degree tilt and 360-degree pan of its separate barrel-mirror scanner, allows for all-encompassing “magical” 360-degree effects that fill huge areas with intense, spinning beams of ultra-bright colored lighting. This unique combination of energetic movement and color makes the Warlock quite unlike anything else found in the ADJ range, while its capacity for room-filling effects makes it the perfect centerpiece fixture for event producers, small to mid-sized clubs and mobile entertainers.

The Warlock’s rapid and energetic movement is enabled by its stepper motors with micro-stepping, which allow for more precise pan and tilt positioning and ensure that the fixture’s beams are scattered throughout the room. This is what makes the fixture so well-suited to the needs of mobile entertainers, nightclubs, bars and entertainment centers that want to fill large areas with movement and color. For users whose lightshow already includes wash lights and moving head beams, the Warlock is the ideal complementing fixture; bringing a mesmeric third element to both mobile displays and fixed installations.

Furthering the effects of the Warlock even more are its pulse and strobe effects, which allow users to bring an added dimension of intensity to their lightshow. Using these variable speed strobe effects, users can create a club atmosphere for their guests and bring added excitement to the dance-floor!

“We really feel that the new Warlock is the embodiment of everything ADJ stands for, offering our renowned good value without compromising on quality,” says National Sales Manager for ADJ USA, Alfred Gonzales. “With its unbelievably powerful 132W Philips Platinum MSD 2R source and all-encompassing 360-degree mirror movement, the Warlock lets users bring potent colored moonflower effects to every corner of a venue, without the need to blow their budget.”

In terms of control, the Warlock gives users access to three operational modes: Show Mode, Sound Active Mode and an 8-channel DMX-Controlled Mode. Using the Show and Sound Active modes, mobile DJs, entertainers and other users that want a simple but effective display can make the most of the fixture’s six built-in programs, which will generate incredible effects either automatically or in time to music. Meanwhile, for lighting designers and users that want to get more in-depth control, the 8-channel DMX mode gives them the flexibility to tailor their lightshow to suit a particular event or client request.

With IEC in/out connections, users can also daisy-chain the power for up to three units at 110V (or six at 230V), saving the hassle of extensive wiring and enabling them to bolster their lightshow with multiple effects. Furthermore, weighing in at just 22 lbs. (10kg) and with compact dimensions (20.25”x20.25”x14” / 512 x 516 x 354mm), mobile users can easily take the Warlock on the road with them as part of a more extensive lightshow, without taking up valuable space in their vehicle.

Whether they’re event producers, mobile entertainers, nightclub/venue operators or entertainment center owners, users can now achieve powerful, far-reaching multi-moonflower effects in a range of colors thanks to the “magical” features found on the new Warlock. Furthermore, offering value without compromising on quality, the fixture lets users create pure lighting excitement for their audiences without having to spend big.