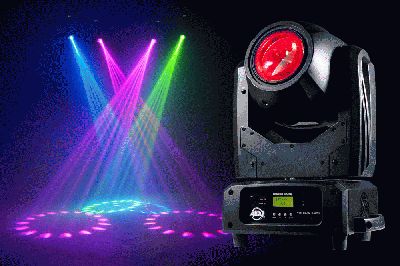 Powered by a potent Osram® Sirius HRI 1R discharge lamp, with a 6,000-hour life rating, the RXONE produces a sharp 3-degree beam that travels up to 100 meters. With a brilliant-white color temperature of 8,000˚K and impressive illuminance measurements of 99,250 lux at 10m and 70,030 lux at 15m, the fixture is able to generate immense beams that will cut through ambient light to create eye-catching mid-air effects.

As the Vizi Beam RXONE is extremely compact and lightweight, it is also capable of incredibly fast movement, further adding to its potential for creating awesome lightshows. Furthermore, thanks to its 16-Bit Pan/Tilt movement, the RXONE is also capable of smooth slow movements and precise positioning, making it a flexible lighting tool for a extensive range of uses. It offers a wide 270-degree Tilt range and complete 360-degree Pan movement, with the option to extend this up to an impress 540-degrees.

A wheel loaded with 14 colors + white allows the beam to be saturated in a useful variety of vivid hues, while a split-color function allows even more variety for mid-air effects. These can further be enhanced by the separate GOBO wheel offering a choice of 15 static GOBO patterns + open (spot) as well as a GOBO shake effect.

To allow for variety, and for subtler moments within a show, the output of the RXONE can be reduced thanks to its 0-100% electronic dimming function. For high-energy moments, a variable speed strobe feature is also included. This offers regular constant-speed strobing as well as a random slow-to-fast Pulse effect.

The Vizi Beam RXONE also boasts a 16-facet prism that will split the beam into a ring of 16 separate beams to allow the creation of immersive mid-air tunnel effects which look spectacular. The unit is also equipped with a 21-degree Frost Filter allowing its use as a wash light, adding to the flexibility of this ground-breaking new product.

“Offering a new level of brightness and agility at this price point, the ADJ Vizi Beam RXONE really does need to be seen to be believed,” enthused ADJ USA’s National Sales Manager, Alfred Gonzales. “Producing sharp beams, vivid colors and intricate mid-air patterns, while offering lightning-fast movement, this is a small but mighty lighting fixture that is equally suited to permanent installation as it is to a life out on the road”.

Despite packing a huge punch when it comes to its light output, the Vizi Beam RXONE’s sleek outer casing is surprisingly compact. Measuring 9” x 11” x 15.25” (225 x 279 x 387mm) it is ideal for installation in clubs and other venues that are restricted by lower ceilings. Equally, weighing just 20 lbs. (9.2kg) the fixture is very easy to lift, carry and rig, making it perfect for mobile entertainers and concert tours.

As with all ADJ products, the Vizi Beam RXONE offers a choice of control options, with mode selection and DMX addressing facilitated by an illuminated LCD display panel with four push-buttons located on the front of the unit. A choice of two DMX control modes is available, 15 or 17-channel, allowing exacting control over every one of the fixture’s features as well as remote access to the movement and prism macros. For added flexibility, the RXONE is also compatible with ADJ’s UC IR remote control and Airstream IR iOS wireless control App (both sold separately).

Thanks to its incredibly efficient light-source, the fixture has a maximum power draw rating of just 199W, making it ideal for use in situations where mains power is limited. What’s more, it offers multi-voltage operation for use around the world, an essential feature for international touring. The unit is also fitted with professional PowerCon Input and Output sockets, which means that the power supply to multiple fixtures can be linked to reduce the number of power cords required when setting up a show. Up to 8 Vizi Beam RXONEs can be linked at 120V, while the power supply for as many as 16 fixtures at be linked at 230V.

Offering an incredible level of light output considering its price and size, the ADJ Vizi Beam RXONE is perfect for creating vivid and varied mid-air lighting effects both for fixed installations and for touring productions. Not only is it impressively bright, but it offers an advanced feature set - including a prism and Frost Filter - that make it a flexible tool for the modern lighting designer.

For any professional lighting user looking for a big beam on a budget, the ADJ Vizi Beam RXONE is the new obvious choice.