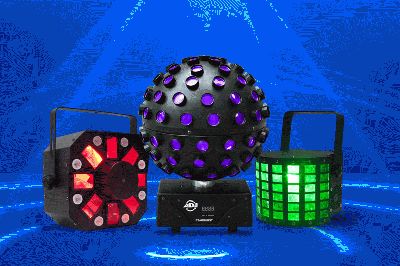 ADJ returns to its roots by re-energizing the Startec Series, offering users a series of futuristic fixtures that generate game-changing effects without the problematic price-tag...

Celebrating 30 years by returning to its roots, ADJ has brought its Startec Series of budget-conscious party fixtures back to life; releasing three new effects that offer a modern twist on some old classics. Ideal for bands, party hosts and DJs just starting out, the Stinger, Mini Dekker and Starburst all live up to the Startec name by creating futuristic effects that take audiences into another dimension.

The Stinger offers 3-FX-IN-1 utilizes three light sources – six 5W hex-LEDs, eight 3W white LEDs and a red and green laser – to give users a Moonflower/Strobe/Laser combo effect that creates new levels of pure lighting excitement for audiences. While users zap their crowds with razor-sharp red and green laser beams, the colored Moonflower effects powered by the hex-LEDs fill the dance-floor with unique color and movement, and the intense bursts of white strobe light add a club-style atmosphere, no matter what the venue.

Meanwhile, rapid but accurate movement, enabled by the unit’s 1.8-degree long-life stepper motor technology, ensures that the moonflower effects can move through the air at high speeds, for greater effect, while also being able to move in slower, smoother movements for when users are playing ‘mood music’.

This versatile, quick movement can be used to great effect when operating the Stinger in DMX-Controlled mode, which offers control via 10 DMX channels. The Auto Run and Sound Active modes, meanwhile, allow for more simplistic operation, though the intense impact of the effects still remains intact: the built-in shows harnessing hypnotic active lightshows that will fill the dance-floor or stage and transform any small venue or house party.

Weighing just 11 lbs. (5kg), mobile DJs, DIY touring bands, and event organizers can take the highly-portable Stinger on the road as part of their mobile setup, giving them a compact but powerful effect at an affordable price. Small clubs, lounges and bars bound by a strict budget can also utilize the varied effects of the Stinger without breaking the bank.

Possibly the most futuristic of the new Startec Series effects, the Starburst is a rotating “futuristic Mirrorball” fixture that sends out incredibly concise beams of colored lighting that create a moving array of super-effective ‘stars’ when projected onto walls, ceilings and floors. This ‘night-sky’ effect is enhanced by the unit’s powerful 50W source, which consists of five 15W six-color (RGBAW+ PURPLE) LEDs and generates highly powerful beams of light in a wide pallet of colors. Furthermore, the Starburst’s tight beam angle helps the shafts of light cut through darkness and fog to offer a futuristic, far-reaching effect that will transform any small-medium sized venue.

Using Sound Active mode, the Starburst’s effects will bounce and rotate in time with the music, for eye-catching, synchronized results. Or, using DMX-Controlled mode, users can go more in-depth with their programing; controlling color, rotation speed and strobing to mesmerize audiences with a varied and exciting display.

Offering impressive coverage thanks to its 48 lenses, the Mini Dekker is an inventive LED fixture that produces RGBW-colored effects that shoot out in every direction to create a moving galaxy of ultra-bright beams. With a powerful light source consisting of two 10W quad-color LEDs, the beams generated by the Mini Dekker are powerful and varied in color, creating a lightshow that leaves audiences awestruck and venues radiating pure lighting excitement.

Users have five operational modes to choose from: Sound Active, Static Color, DMX-Controlled, Color Change and Color Fade (both with and without strobe). With an 8-channel DMX mode, users can also get more creative with the Mini Dekker, programming its strobe effects and multi-color beams to add increased energy to their displays.

Weighing just 4 lbs. (1.7kg), the Mini Dekker, much like the other Startec Series fixtures, is ideal for taking on the road as part of a more extensive setup, making it particularly well-suited to mobile DJs and touring bands as well as small venues.

“Our refreshed Startec Series is ideal for customers that are on the move or small venues that need compact but powerful LED solutions,” said Alfred Gonzales, National Sales Manager for ADJ USA. “Whether it’s the Moonflower, strobe, laser combo effects of the Stinger, the 48 lenses of the Mini Dekker, or the powerful six-color 1%W LEDs found in the Starburst, all three budget-conscious fixtures let users generate room-filling, eye-catchingly futuristic effects without having to spend big!”

So, whether they’re a mobile DJ, entertainer, party host, small club, bar or entertainment complex operator, users not only benefit from the no-nonsense price of the Startec Series fixtures, but also their compact but super-bright effects. The Stinger, Mini Dekker and Starburst offer an array of lasers, moving beams and unique colors between them – all of which combine to create pure lighting excitement for the user’s audience.