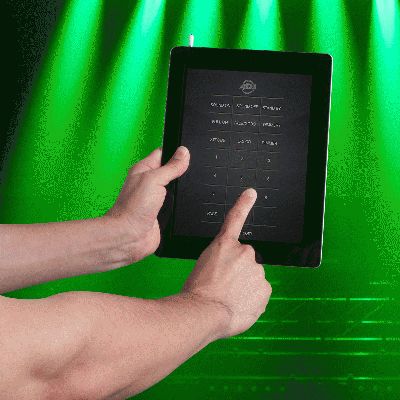 ADJ has revolutionized wireless lighting control with the release of its new free-to-download Airstream IR app, which lets users turn their handheld device into a universal infrared remote control compatible with a wide range of ADJ products. Now, the company has added even more products to this list, including popular effects such as the Revo 4 IR and ground-breaking new ones like the Micro Galaxian II, all made even more versatile by the inclusion of built-in IR technology.

Airstream IR is a brand new lighting control app designed for use on all iOS devices (iPad and iPhone) and, once downloaded, it lets users control a wide range of IR-compatible ADJ fixtures, wirelessly, from the convenience of their phone or tablet. Essentially, it’s a digital version of the popular UC IR remote; allowing users to trigger effects and adjust settings from a significant distance (15-20ft), giving them the freedom to create pure lighting excitement from afar, whether on-stage, behind the booth or situated at the back of a venue or outdoor space.

In order to enjoy the convenience of this wireless control app, users simply have to connect one of the Airstream IR adapter (included in the box of the compatible lighting fixture) to their iOS device. The adaptors are also available in packs of four. These sensors are incredibly small and lightweight, plugging into the headphone port of the user’s device and immediately allowing the app to transmit commands to the ADJ fixture in use. Depending on which IR-compatible ADJ effect is being used, users will then be able to control a range of features from their device, with the app adjusting its interface accordingly. This makes it easy to access the features that really make each ADJ product unique – whether it’s eye-catching GOBO patterns or the capacity for smooth color mixing.

Originally compatible with the Ricochet, ON-X, H20 IR, H20 DMX IR, Gobo Projector IR and a wide range of the popular Inno Pocket fixtures, including the recent Fusion and Z4 effects, the Airstream IR app can now also be used with an array of other affordable but highly effective products. So, users have even more ways to create pure lighting excitement – without the need for data cables or wired remotes!

Taken from ADJ’s popular REVO series, the Revo 4 IR is an LED moonflower effect that utilizes a matrix grid of 256 LEDs, allowing users to produce an invigorating display of razor-sharp beams in red, green, blue and white. These colors can be turned on and off, creating a variety of patterns that are perfect for use at parties, whether with fog and without. Now, with Airstream IR-compatibility built-in, users can control these stunning multi-color moonflower effects wirelessly from a position of their choosing, without the need to run wires. http://www.adj.com/revo-4-ir

Another product that really benefits from the new Airstream IR app is the multi-purpose Dual Gem Pulse IR, which offers users with two effects in one! As a highly adaptable dual-lens moonflower effect, the Dual Gem Pulse IR lets users create a stunning assortment of red, green and blue beams as well as an intense white strobe effect – the combination of which results in a mesmeric display of pure lighting excitement! Of course, with IR-compatibility, users can now adjust and trigger these high-energy built-in programs from the convenience of their handheld device, making Dual Gem Pulse IR more accessible than ever before. http://www.adj.com/dual-gem-pulse-ir

ADJ has also refreshed the popular Galaxian Gem IR. This mobile friendly 2-FX-IN-1 lighting effect features a Dual RGBW LED Moonflowers plus a “Galaxian style” effect with 100’s of green beams all in one case. This effect offers small clubs and mobile entertainers the convenience of having multiple effects in one light show without having to transport multiple fixtures. The Galaxian Gem IR is easy-to-use and has 3 operational modes: Sound Active Mode, Show Mode, & DMX Controlled. The fixture can run as a stand alone unit or in a Master-Slave set up. The Galaxian Gem IR’s laser offers a smooth 1.8-degree stepper motor, while the Moonflower projects 92x 5mm LEDs (32 red, 20 green, 20 blue and 20 white. http://www.adj.com/galaxian-gem-ir

The third of ADJ’s recently updated, IR-ready moonflower effects is the Jellyfish IR, taken from ADJ’s range of unique ‘jelly’ products, which utilize bright LED sources and clear plastic cases to offer colorful two-in-one effects. Boasting a bright LED source, a wide beam-spread and a series of attention-grabbing automatic programs, the Jellyfish IR produces cutting RGBW beams while its glowing case simultaneously changes color for added effect. With no duty cycle and now IR-compatibility too, users really can run the Jellyfish all night long, safe in the knowledge that it can be easily controlled without the need to run wires or adjust settings via the rear panel. http://www.adj.com/jellyfish-ir

Utilizing one 30mW (532nm) green laser and one 80mW (650nm) red laser, the inventive new Micro Galaxian II gives users the power to create a spiralling galaxy of green and red stars and dots, casting super-bright laser effects down onto the dance-floor for a lightshow that will transport guests into another dimension! Featuring a range of highly effective built-in programs, these auto settings can be easily changed and activated using the Airstream IR app, which lets users trigger Auto/Sound Active modes, blackout the fixture, and change settings for Color Change and Rotation. http://www.adj.com/micro-galaxian-ii

Boasting a range of similar features to the Micro Galaxian II, but with its own distinctive twist on modern laser lighting displays, the Micro Gobo II utilizes one 30mW (532nm) green laser and one 80mW (650nm) red laser to generate over 200 color beams. As well as bringing energy, movement and color to the dance-floor, users can easily project a range of effects – including hearts, stars, flowers and starfish – onto the wall and ceiling of the venue, thanks to its eight selectable GOBO patterns. As with the Galaxian II, the Micro Gobo II is also compatible with Airstream IR, providing users with dynamic wireless control over its awesome GOBO effects! http://www.adj.com/micro-gobo-ii

ADJ has also updated its adaptable Ikon GOBO projector with IR-compatibility, offering users the Ikon IR, which is still powered by a super-bright 60W white LED and still boasts crisp clear projection thanks to its high-quality optics. With four metal GOBOs, three interchangeable lenses (for variable 25-degree, 32-degree and 43-degree beam angles) and the capacity to be fitted with custom GOBOs too, the Ikon was already highly versatile. The difference now is that, thanks to the Ikon IR’s built-in infrared technology, users can adjust a range of settings – including the LED brightness and GOBO rotation – wirelessly from a position of their choosing, making this popular projector even more flexible. http://www.adj.com/ikon-ir

Powerful, portable and offering up a varied selection of game-changing effects, these affordable but atmosphere-enhancing ADJ lighting effects are now even more adaptable, thanks to their compatibility with the revolutionary new Airstream IR control app. Continuing ADJ’s commitment to innovation, users now can now be even more flexible in how they create and control their pure lighting excitement, while keeping costs down. ADJ plans to continue to develop products that are compatible with the Airstream IR App.