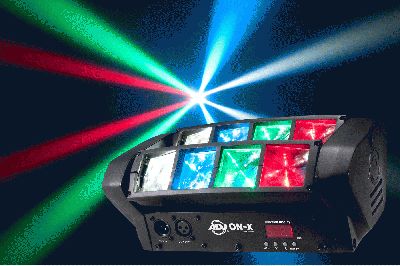 These far-reaching effects are enhanced by the 8-zone chasing offered by the ON-X’s LEDs and the precise positioning enabled by its high-speed stepper motors, both of which let mobile DJs, venue owners, event organizers, roller rink managers and LDs take their lightshows to the next level, filling the dance-floor with high-impact color effects and sweeping movement.

Best when used in multiples, ADJ has designed the ON-X to bring these room-filling effects to nightclubs, lounges, bars and mobile shows; compact and lightweight, but with unique movement, the ON-X provides users with extensive coverage and an impressive overall effect, packing big-impact lighting into a portable unit. Furthermore, ADJ has ensured that the fixture can be mounted vertically or horizontally, allowing users to generate a varied and far-reaching lightshow that utilizes cool clamshell effects to mesmerize the audience!

While the ON-X’s powerful LED source and impactful strobing offer an intense lighting experience for the audience, these effects can be easily dumbed down using the 0-100% electronic dimming. For clubs hosting late-night parties or mobile entertainers working all-day events, the unit will run cool all night, without the need for duty cycles, allowing users to continue creating pure lighting excitement for as they need.

“We’re always looking for ways to offer our customers more bang for their buck and with the ON-X we’ve managed to provide a compact and affordable fixture that creates far-reaching, fast-moving beam effects that can really ignite the dance-floor,” said Alfred Gonzales, National Sales Manager for ADJ USA. “Flexible enough to be mounted vertically or horizontally, the ON-X is highly effective as a standalone clamshell-style centerpiece effect. But it’s even more impressive when used in multiples, capable of filling the venue with mesmeric multi-beam displays.”

In terms of control, users have access to three operational modes: Show, Sound Active and DMX-Controlled, all of which can be selected from the unit’s four-button LED display and the latter of which offers an impressive six channel modes, letting users tailor their lightshow to unbelievable new levels.

In the basic 2-channel mode users can select Sound Active mode and various Show modes, as well as adjust the show speed and sound sensitivity. Stepping it up, the ON-X’s 9-channel mode allows users to adjust strobing settings, control RGBW and master dimming, fine-tune the tilt movement of both heads, and select special functions. Building on these nine channels, the 11-channel mode adds the Show/Sound Active settings found in the 2-channel mode, while the 12-channel mode also grants access to a range of dimmer options, including stage, TV and architectural modes. In-depth control over each individual LED color on each head is offered in the ON-X’s 16-channel mode, while the fully blown 18-channel setting adds to this with control over fine tilt movement for each head.

For those users that want to keep things simple, enjoying the impactful effects of the ON-X without the need for complex DMX programing, the Show and Sound Active modes benefit from a range of built-in programs, allowing users at all levels of lighting experience to create something special for their audience. The ON-X is also compatible with the separately sold ADJ UC IR remote (sold separately), which grants control over the fixture’s basic features from a range of up to 30ft (9m). So, whether the user is behind the booth, on stage, stood at the back of the venue or operating the lights from afar, they can continue to produce mesmeric, captivating displays no matter what their position.

The ON-X may also be controlled by ADJ’s new Airstream IR App for iOS mobile devices. Airstream IR may be downloaded from the App store for free. Just connect the sensor to your iOS device and start controlling the ON-X’s basic functions wirelessly. There is one Airstream IR sensor inside the ON-X box. Additional sensor may be purchased from an authorized ADJ Dealer.

Whether users want to set the ON-X on the ground for upward-facing effects or mount it onto the wall for overhead displays of sweeping beams, the included mounting bracket makes a range of positions possible. Linking multiple ON-X effects is also a breeze thanks to its IEC in/out connections, which allow users to daisy-chain the power for up to 17 fixtures at 120V (or 26 at 230V) – this makes it even easier to produce an extensive lightshow that lets the user fill larger venues and spaces with fast-moving color effects.

No matter how small the venue or how portable the setup, ADJ has ensured that the ON-X will fit right in, weighing a meagre 5.5lbs (2.5kg) and boasting compact measurements (11.25 x 6 x 4.25in (283 x 151 x 110mm)), so users can easily incorporate the effect into their mobile setup and install the unit inside venues with limited space.

Versatile in its positioning, far-reaching in its effects and compact enough for use in small venues and mobile lightshows, the ON-X lets a wide range of users – from event organizers and venue owners to mobile entertainers and stage performers – generate stunning multi-beam displays of pure lighting excitement, all without blowing their budget!