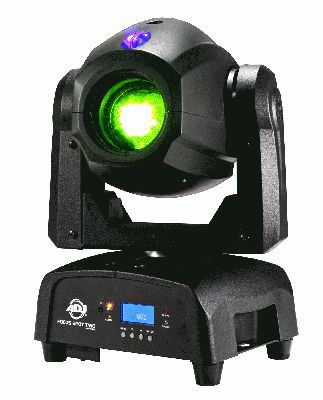 ADJ is pleased to announce the release of the Focus Spot Two, a feature-packed and powerful spot fixture, with easy accessible GOBO replacement, sets a new standard for what can be achieved from a compact and affordable moving head. Joining the smaller Focus Spot One and larger Focus Spot Three Z, this new fixture rounds out ADJ’s hotly-anticipated Focus Series.

While the supplied GOBOs are suitable for a variety of applications, each one can also be replaced with a custom pattern. What’s more, thanks to ADJ’s innovative EZ GOBO replacement feature, changing a GOBO only takes a matter of moments. Only a single screw needs to be removed in order to swing open the hinged case and access the wheel, which allows GOBOs to easily clip in and out. This means that changing patterns between events, or even during a changeover between performers, is a very quick and easy task.

The Focus Spot Two is powered by an efficient 75-Watt cool white LED light-source, with an operational life of approximately 50,000 hours. The light output from the LED is concentrated through an advanced optical system to create a seriously impressive beam that is capable of cutting through ambient light to generate striking mid-air effects and impactful surface projections.

As an added bonus, the Focus Spot Two is also equipped with a separate 3W UV LED. This is independently controllable and means that the fixture can also be used to bath a stage or venue with atmosphere-enhancing ultraviolet light. The fact that the fixture offers this UV effect – which causes white and fluorescent clothing and décor to glow impressively – is just one of many features of the Focus Spot Two that set it apart from any other moving head in its class.

Motorized focus is another advanced feature offered by the Focus Spot Two – and all of the other fixtures in the Focus Series. This means that the focus of a projected GOBO can be altered electronically, controlled via DMX, to ensure that the pattern always appears sharply in focus even as the projection distance alters when the head moves from one position to another. The intensity of the fixture’s beam can also be altered, thanks to 0-100% digital dimming, while added impact can be achieved using the variable speed strobe function.

The fixture’s beam angle is also variable between 15 and 20 degrees, which means that it can be tailored for a specific size of venue or type of show. Changing the projection angle – zooming – is easy to do and is carried out manually using the convenient recessed wheel located on the top of the unit.

Separate color and GOBO wheels allow for the Focus Spot Two’s beam to be shaped and colored in a plethora of different ways. The color wheel features eight vibrant options - in addition to open white – and can also be set between adjacent positions to create impressive split-color effects. The GOBO wheel features six rotatable GOBOs – in addition to an open spot – including one colored glass pattern. The remaining GOBOs are metal, and feature a good variety of detailed patterns, some ideal for creating mid-air effects and others more suited to projecting texture onto stages and backdrops or venue walls and ceilings.

Another advanced feature offered by the Focus Spot Two, which has previously only been seen on larger and more expensive fixtures, is indexed GOBO rotation. Not only can GOBO patterns be set to rotate continuously – at variable speed in either direction – but precise static rotational positions can be recalled via DMX. This means that, for example, text GOBOs can be programmed to always display the right way up, regardless of the projection angle.

Thanks to its powerful light-source and rotating GOBOs, the Focus Spot Two is ideal for creating impressive mid-air effects and eye-catching surface projections. These can be further enhanced by the application of the unit’s in-built 6-fact prism, which splits the projected pattern into six separate identical patterns arranged in a circular formation. This creates impactful projections, and also increases the spread of the projection, making it perfect for adding interest to stage sets or large plain surfaces within a venue.

With dimensions of 6.75” x 9.25” x 15.25”/ 173mm x 237mm x 385mm (LxWxH), and a total weight of just 16 lbs. / 7.3kgs, the Focus Spot Two is incredibly compact and portable, especially considering its expansive feature set. It also offers flexible mounting options, provided with rubber feet for floor-standing and a detachable Omega bracket to allow rigging from truss, a T-bar or a goalpost stand.

Due to its compact size, the fixture is capable of extremely fast movement, with the ability to fly through its wide 540-degree pan range and 230-degree tilt range if required. However, thanks to the inclusion of micro-stepping motors, it is also capable of smooth sweeping motions as well as precise positioning for static beam projection.

Yet another useful feature offered by the Focus Spot Two, which is rarely seen on compact and affordable moving heads, is locking PowerCon power input and output sockets. These professional standard connections ensure that the power supply for the unit won’t accidentally become disconnected during an event or performance. The fixture is also fan-cooled – with fans located in both the base and the head itself – to ensure reliable continuous operation for as long as is required.

“I’m incredibly excited about the Focus Spot Series, and the Focus Spot Two in particular”, enthused ADJ USA National Sales Manager, Alfred Gonzales. “The whole range offers advanced features such as motorized focus, easily replaceable indexed rotating GOBOs and locking PowerCon input and output sockets that set them apart from all other fixtures of a similar size and price. Then the Focus Spot Two has an incredibly powerful LED, yet is very compact, which also really helps it to stand out in a class of its own. I’m sure it’s going to prove extremely popular with all kinds of lighting users and specifiers, especially those who use custom GOBOs a lot, in fact I’m excited to hear about all of the creative ways it is used by our customers to create pure lighting excitement at venues and events of all types and sizes!”

Equally suited to lighting novices making their first investment into moving heads as it is to lighting professionals seeking advanced features from an affordable fixture, the Focus Spot Two offers a variety of different operating modes. For an easy ‘hands off’ lightshow, the unit is pre-programmed with four dynamic built-in shows, which can be set to run at a set speed or triggered by the beat of the music. Multiple fixtures can then easily be linked using XLR cables for an easy-to-setup synchronized lightshow.

For advanced control, every one of the Focus Spot Two’s extensive set of features can be fully utilized through DMX. A choice between two DMX control modes is offered – 16- or 18-channel – and mode selection, as well as DMX addressing, is easy to carry out using the backlit LCD display screen on the front of the unit.

Further adding to the fixture’s flexibility, it is also compatible with ADJ’s UC IR remote control as well as the new ADJ Airstream IR system that allows wireless control from an iPhone or iPad. This provides a halfway option between complete standalone operation and full DMX control.

With its potent output, expansive feature set and compact form, the Focus Spot Two is ideal for a wide variety of permanent installations, touring productions and one-off events. Perfect for use in bars, clubs, roller rinks, bowling alleys and churches, to generate dynamic lighting effects week in and week out, it is equally suited to production companies and mobile entertainers who provide lighting services for one-off events and can find themselves in a different venue every day. Whatever the purpose, when it comes to high output, feature-packed, compact and affordable moving head spots, the ADJ Focus Spot Two sets the new standard.

The Focus Spot Two is available now from ADJ USA and ADJ Europe.