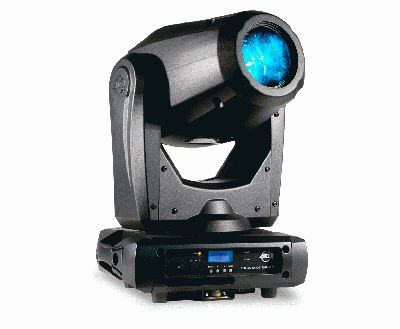 The first in ADJ’s new Focus range of LED-powered moving head spots offering motorized focus as standard, the Focus Spot Three Z is a feature-packed professional fixture ideal for mobile applications as well as fixed installation. In addition to the motorized focus, that will run through the whole of the new Focus series, this top-of-the-range model also offers motorized zoom, as signified by the ‘Z’ in its name, allowing the beam angle to be altered remotely between 13- and 18-degrees.

At the heart of this new fixture is an incredibly powerful 100W white LED light-source, which generates piercing beams and sharp pattern projections. Offering the usual benefits of LED, such as low power consumption and long lamp life (50,000 hours), the Focus Spot Three Z doesn’t skimp on brightness, generating an output of 6300 lux measured at a distance of 3 meters. This allows for striking midair beam effects as well as vivid pattern projections over long distances.

A wheel loaded with 8 colors (+ open white) allows for rich hues to saturate the Focus Spot Three Z’s beam, while two separate GOBO wheels allow lots of creative freedom when it comes to shaping it. The first wheel is fitted with 7 static GOBO patterns (+ open spot), while the second is loaded with 6 replaceable rotating GOBOs (+ open spot). Whichever GOBO is chosen, the projection can be kept sharp - regardless of distance - using the remote motorized focus function and the size of the projected GOBO can be altered remotely by the motorized zoom.

The potential for impressive projections and midair effects doesn’t stop there, as the Focus Spot Three Z also offers not one, but two, rotating 6-facet prisms. The first is circular, splitting the projected beam into a cluster of 6 smaller patterns, while the second is linear, generating a rotating line of GOBO projections. Each prism can be rotated at variable speeds, allowing for the creation of effects that range from subtle mood-enhancers to impactful crowd-energizers.

The Focus Spot Three Z’s extensive feature-set is completed by 0% - 100% dimming, with a choice of 5 selectable dimming curves, as well as variable-speed electronic strobing and pulsing. Further creative potential is also provided by the GOBO shake feature and the ability to select split-colors.

Despite its full complement of professional features, the Focus Spot Three Z is, relatively, both light and compact. Weighing 24 lbs. (11 kgs), it is easy to lift and maneuver, while its modest measurements of 7.25” x 11.25” x 18.75” (185mm x 284mm x 479mm) make it easy to store and transport as well as allowing its use in venues with lower ceiling heights.

A professional lighting fixture, the Focus Spot Three Z is fan cooled and offers locking PowerCon input and output sockets. This, coupled with its low maximum power draw of 230W, means that up to three fixtures can run from the same power supply at 120V (and up to six fixtures at 230V). The unit can also be mounted in any orientation and is supplied with large-rubber feet for floor-standing as well as an Omega Bracket for truss mounting.

“With the introduction of the Focus series, we’re really seeing LED-powered moving head spot fixtures move into a new league,” said ADJ USA’s National Sales Manager, Alfred Gonzales. “The Focus Spot Three Z offers phenomenal output for its minimal power consumption and a feature-set that makes it suitable for all kinds of professional fixed and touring applications. What’s more, with a very affordable price, this new fixture offers these advanced features to productions and events with lower budgets than ever before.”

A choice of three operating modes means that the Focus Spot Three Z can be used in all situations, whether a simple ‘standalone’ or full DMX-controlled lightshow is required. The unit is pre-programmed with four built-in lightshows, all of which can be set to run in either Show Mode (at a constant speed) or Sound Active (triggered by the beat of the music). Multiple fixtures can then be linked for Master/Slave operation, which can be enhanced by inverting the pan or tilt of certain fixtures to generate contrasting movements. This means that an impressive synchronized lightshow, running across multiple fixtures, can easily be created quickly and simply without the need for any DMX programming knowledge or control software.

Of course for many applications where the Focus Spot Three Z is likely to be used, DMX will be required for precise control of the unit’s expansive feature set. This is possible using a choice of 18 or 21 DMX channels and a backlit 16-character LCD display screen with four push buttons allows mode selection and DMX addressing through an intuitive menu-driven interface. A 180-degree Inverse View mode is also available for this, making it easier to use when the fixture is installed hanging downwards.

The Focus Spot Three Z is equally suited to mobile entertainers looking to expand their lightshow as it is to lighting designers requiring an advanced but affordable fixture for use on tour or to install in a club, theatre or church. It’s fast movement, rotating GOBOs and 6-facet prisms make it ideal for adding energy to EDM events or rock shows, while it’s 16-bit movement and remote zoom and focus ability make it just as suitable for subtle pattern and mid-air beam projection at conferences, church services and theatre productions.

Bursting with features, the Focus Spot Three Z is an ideal choice for all kinds of mobile and installation applications. It offers solid build quality, impressive output and everything a lighting designer needs to create an impressive show, all for an incredibly affordable price.