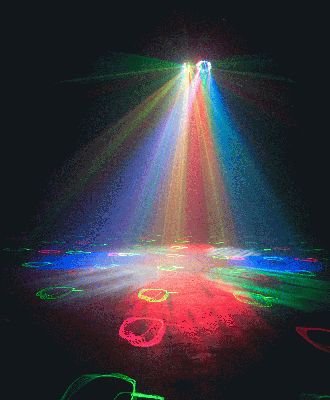 ADJ has expanded its popular Startec Stinger series of multi-effect "party starter”  lighting fixtures with two distinctive units, each capable of filling a large area with dynamic movement, saturated color and unbridled energy. The new Stinger Star and Stinger GOBO each offer 3-in-1 moonflower, wash and laser effects designed to get any party started.

The Stinger Star features a unique party dome moonflower effect which projects countless beams of razor-sharp light that sway and spin in a blaze of movement and color. The room-filling effect is powered by six 3W RGBWAV LEDs that project moving beams of light through the dome’s multifaceted surface creating a multitude of dancing shafts of colored light.

This unique moonflower effect is complimented by an integrated red and green Galaxian-style multi-beam laser effect. This generates animated patterns – including dots, triangles, circles, hearts, arrows and stars – which are then multiplied by a diffraction grating to create a myriad of laser beam projections that spread out over a wide area.

Finally, the Stinger Star also incorporates a color-chasing wash effect that further enhances the unit’s beam output. Surrounding the laser aperture are six 1-watt LEDs: two red, two green, two blue and two amber; which can be used both for static color washing as well as to create eye-catching animated patterns. The unique circular arrangement of the LEDs allows for continuous spiraling chases which add another dimension to the wash effect.

Also joining the ADJ Startec Stinger range is the Stinger GOBO, this new fixture shares the same laser and wash elements as the Stinger Star, but instead of the moonflower dome it features an innovative sweeping pattern effect. Eight 3W RGBA LEDs are projected through eight different GOBO patterns which in turn are projected through eight lenses mounted to a rotating disc on the front on the unit. This creates a unique effect that involves GOBO patterns sweeping in and out, as well as spinning around, to create an attention-grabbing effect that is perfect for injecting energy onto a dancefloor.

Ideal for use on the road by mobile entertainers, as well as for installation in entertainment venues such as bars, clubs, roller rinks and bowling alleys, the Stinger Star and the Stinger GOBO are both flexible fixtures that can be used in a variety of different ways. Each of their three effects can be used in isolation, while they can also be used in pairs or all together at the same time.

Each of the units is supplied pre-programmed with six exciting shows which can run in Show Mode, at a user-defined speed, or Sound Active mode, triggered by the beat of the music. Multiple fixtures can also be linked together using XLR cables for synchronized Master/Slave operation. Both models can also be controlled via DMX, using a choice between either a basic 2-channel or comprehensive 14-channel mode. DMX addressing and mode selection is provided through a menu-driven interface accessed via a 4-digit LED display, and corresponding 4 push buttons, located on the rear panel of each fixture. Both fixtures are also compatible with ADJ’s UC IR Remote (sold separately) and are supplied as standard with an ADJ Airstream IR transmitter which allows their control via the free to download ADJ Airstream IR App. This offers basic control of the effects directly from an iOS phone or tablet.

The Stinger Star and Stinger GOBO share the same distinctive casing design and are both robustly constructed from powder-coated metal. The case features a heavy-duty safety loop and flexible multi-angle hanging bracket making these fixtures perfect for permanent installation - mounted on a ceiling or wall - as well as for hanging on a T-bar or truss structure as part of a mobile lightshow. Both fixtures are compact and lightweight; the Stinger Star weighs 10 lbs. (4.4kg.) and measures 16.25” x 8.25”x 9.5” (410x210x238mm), while the Stinger GOBO is a little heavier at 11lbs. (5kg.) but also a little smaller, measuring 16.25” x 8.25”x 6” (410x210x151mm).

Each fixture is fitted with IEC power input and output sockets, which means that the power supply for multiple units can be linked (up to 8 @ 120V and 16 @ 230V), reducing the number of cables needed when setting up a multi-fixture lightshow. Also, thanks to their use of LED technology, the units run cool and have no duty-cycle, meaning that they can run non-stop all night long.

“At ADJ we’re always looking for ways to make life easier for our customers,” explains ADJ USA National Sales Manager, Alfred Gonzales. “In creating both the Startec Stinger Star and Stinger GOBO we’re offering our users two different options, each providing three eye-catching lighting effects rolled into one single easy to transport fixture. This means quicker setups for mobile entertainers and less cabling for installers. The fact that each of these two units has the same outer casing as well as sharing the same laser and wash effects, means that combinations of the two units can also be used to create larger, coordinated light shows.”

Just one Startec Stinger Star or Stinger GOBO fixture is enough to fill a small dancefloor with movement and color, while multiples can be easily linked to create impressive synchronized lightshows. Offering broad color washes, wide-spread moving beams and impressive laser effects, these impactful 3-in-1 lighting fixtures are the perfect party starters!