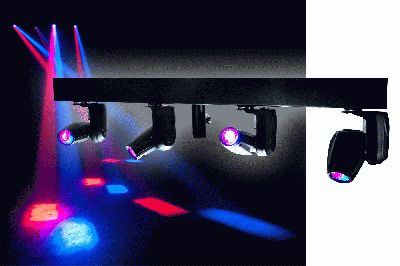 Our world is full of fours. Four basic states of matter: solid, liquid, gas, and plasma. Four seasons in a year: spring, summer, fall, and winter. Four elements with which to represent these seasons: water, earth, wind and fire. So, why shouldn’t lighting be made up of fours too? With the Event Bar Q4, four heads really are better than one!

Forever traversing the realms of innovation, ADJ has taken the idea of RGB one step further, adding white to make the Event Bar Q4 a highly-versatile four-head X-Y bar pin-spot system. 10W CREE quad-color (RGBW: 4-in-1) LEDs power the fixtures, which can pan and tilt independently, making for razor-sharp beams – with a 5-degree beam angle – and a fully-controllable lightshow.

Due to this multitude of features, the Event Bar Q4 is a double-purpose fixture. While in a static position these four versatile moving-heads can work independently to spotlight tables, centerpieces or décor in any color. But then, when the dancing starts, can jump into action scanning beams around the room to add energy to the dance-floor. This makes it particularly suitable for mobile DJs who work weddings and other functions, where the ability to create both a subtle atmosphere – using static lighting – and a lively party feel – using the moving heads – is needed. Once the lightshow is underway, the Event Bar Q4 will be sure to mesmerize audiences using twelve pre-programmed shows and chase-effects – just plug in and play! Alternatively, the unit is fully controllable via DMX allowing its integration into a larger synchronized lighting display.

“After the success of the white LED powered Event Bar DMX, we wanted to move to the next level providing multi-colored beams of light from an equally compact and easy to use product,” explains Alfred Gonzales, national sales manager for ADJ USA. “With the Event Bar Q4 we’ve added RGB color mixing to the staple white to provide complete flexibility which is still affordable. Each head is independently mobile and the system functions as both a set of static pin-spots and as part of a dynamic lightshow, meaning users will find it adaptable to many situations.”

Various operational modes allow users to easily control the fixtures, including Auto (Show Run), Sound Active, and RGBW Dimmer. For easy control, the ADJ UC3 handheld remote (sold separately) can be used to select mode, alter show speed and activate various strobe effects. The power supply for up to six Event Bar Q4s (at 120V) can also be daisy-chained together to minimize the need for messy cables and to reduce setup times.

In terms of practicality, the Event Bar Q4 can be truss-mounted - thanks to its Omega bracket – while a built-in mount also allows it to be fixed directly to the top of a lighting stand (sold separately). There is also a safety loop feature at the rear for extra precaution. The fixture is flicker free and its eco-friendly LED light sources should never need to be replaced thanks to their operational life of approximately 50,000 hours. A useful 4-button DMX LCD display makes mode selection easy, as well as DMX addressing and selection between the four different DMX channel modes: 2, 32, 33, or 37.

ADJ’s cutting-edge Event Bar Q4 is perfect for users who need the freedom of having both static and active lighting – particularly wedding DJs who need lighting for different situations throughout the evening. Thanks to the new quad-LED (RGBW) technology and independently-controlled, versatile DMX moving heads, users now have total control over color and movement, leaving them free to pin-spot specific venue features or create atmosphere-enhancing lightshows for their audiences.