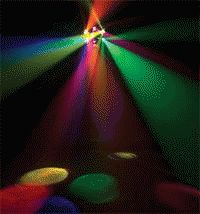 LOS ANGELES - Six heads are better than one, when it comes to club lighting. That's why American DJ's new sound-activated Hexstar effect has -- not two or four -- but six rotating barrel-type mirrored heads.

Each of the Hexstar's six heads rotates independently and bounces multi-colored light off a dichroic dish, sending the dazzling beams spinning around a club or dance floor. With six streams light moving in their own patterns, pulsating to the beat of the music, the Hexstar will flood an entire room in a rhythmic shower of gyrating colors.

"Clubs today are demanding greater versatility in their lighting, which is why we included a three-position FX switch on the Hexstar," explained Scott Davies, General Manager of the American DJ Group of Cos. "In addition to being sound activated, the Hexstar can function as a continuously rotating effect during breaks in the music. Or you can set it in the Sound-Active Colors Only Mode and have just the colors change to the music, with no beam movement, which is great for setting a mood and creating a less frenzied environment.

"Many clubs today have different types of music or shows on different evenings," added Davies. "With the Hexstar, they can buy one centerpiece effect that can be used for different applications - and stretch their lighting dollar, which is another big concern for clubs today."

With its sleek, high-tech case design, the Hexstar also presents a visually attractive appearance in a club setting. Its protruding barrel mirrors give it the look of a robotic-like metal octopus with six tentacles.