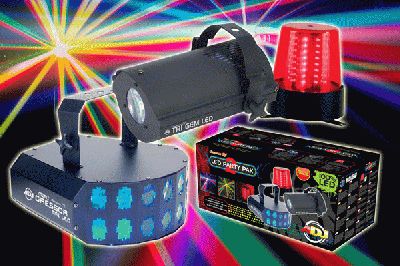 ’Tis the season for parties, lights, fun and giving gifts – and American DJ’s LED Party Pak 2 fits in perfectly with this merry time of year.  A ready-to-go lighting package “in a box,” the LED Party Pak 2 contains three exciting LED effects that will add to the festivities and cheer at any holiday bash, disco, nightclub, DJ show or home party.  Just plug them in and turn them on – and they’ll produce an instant light show that moves and grooves to the beat of the music.

The three effects in the LED Party Park 2 are:

When run together, these three effects complement and enhance one another, allowing even those without any lighting experience to put on a totally terrific light show.  And because all of the effects are powered by LEDs, they’re low-maintenance and energy-efficient, meaning less worries -- and more time for holiday fun.

Simple to use and affordable, the LED Party Pak 2 also fits in with another holiday tradition – gift-giving.  It’s an ideal, attractively-packaged gift to give to that DJ, mobile entertainer, or frequent party host on your list.  Just imagine how thrilled anyone would be to find this collection of dazzling LED effects under the tree!

“The LED Party Pak 2 is a great instant light show package for the holidays – or any other time of year,” said Alfred Gonzales, national sales manager for American DJ.  “The fixtures are so easy to use, with no DMX or programming required, and they’re all classic high-energy party effects.  The Mini Gressor TRI LED and TRI Gem LED are LED-powered versions of some of American DJ’s all-time most popular fixtures – the Aggressor and Gem. The B6R LED is an LED police beacon, which has been a staple effect at parties and discos for decades.  Having LED lamp sources makes these effects even better for users in terms of their long lamp life, low heat emission and greatly improved energy efficiency.”

With the LED Party Pak 2, it’s not only easy to get the party started, but you can keep it going for as long as you want (weeks, months!)  – because the LED lamps in the effects won’t burn out anytime soon. The Mini Gressor TRI LED and TRI Gem LED each have LED lamps rated at 100,000 hours, while the B6R LED’s lamp will last for 50,000 hours.   Another big advantage of LED lamps is low energy consumption, with the Mini Gressor TRI LED consuming just 70 watts of electricity at maximum use, the TRI Gem LED drawing 30 watts, and the B6R LED 25 watts.

The entire LED Party Pak 2 will fit into Arriba Cases model ATP-19 (sold separately), which provides a convenient, secure way to carry the system to parties and gigs, and protect it during transport and storage.

A great value for a complete light show package the LED Party Pak 2 has an MSRP of just $239.95.