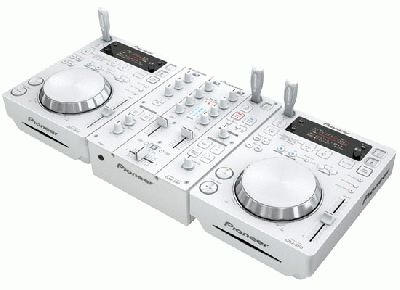 “Offering our gear in more colors than the traditional black is generating new excitement within the DJ community.  The HDJ-500 entry level headphones we introduced several months ago are now available in three colors, and are creating a lot of buzz with DJs.  We are looking forward to the same reaction with the new pearl white version of the CDJ-350 and DJM-350s,” said David Arevalo, senior marketing manager, Professional Sound and Visual Division for Pioneer Electronics (USA) Inc.

Spin It with the CDJ-350-W Multi-media Player
The CDJ-350-W  will allow users to create DJ performances with various digital music files, including MP3, AAC, WAV and AIFF files that are stored on different forms of media, including USB mass storage device class products*1 and CD-R/RW discs. The media player also includes Pioneer’s proprietary music management software, rekordbox™, which analyzes and categorizes music by genre, making it possible to easily manage music files on a computer for quick song selection when played back on compatible Pioneer players.  Connecting a USB storage device loaded with playlists created with the software allows users to choose songs by various criteria such as genre, album name, artist name, etc. for stress-free DJ performances.  Music sessions can also be saved to a USB storage device and then saved in rekordbox as an original playlist.

Blend It with the DJM-350-W Mixer
The DJM-350-W  mixer inherits similar functions and operability of the popular Pioneer DJM series of mixers often experienced in the club scene.  With its new pearl white makeover, the built-in level meter’s red, white and blue LEDs create a stunning appearance.  The mixer is equipped with four sound effects including the newly added Noise and Short Echo, as well as an isolated 3-band equalizer—all of which allow the DJ to make one-of-a-kind mixes.   The Type A USB port on the front top panel allow users to record their DJ mixes onto a USB storage device, review their mix and take it with them to listen to on other devices.

Pioneer’s packaged pearl white DJ system will be available in January 2011 and come with two CDJ-350-W players and one DJM-350-W mixer for a suggested retail price of $2,445.