The Technics 1200 Turntable Is Back

Due to the widespread use of CDs, turntable systems disappeared briefly from the market, but their warm sound quality is bringing them back. 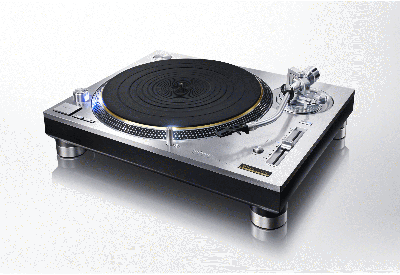 Due to the widespread use of CDs, turntable systems disappeared briefly from the market, but their warm sound quality is bringing them back. The direct-drive turntable invented by Technics is still highly acclaimed by audiophiles and DJs in the form of the SL-1200 Series, and there have been many requests to revive the turntable system. As such, we decided to develop a new system for Hi-Fi use. Here we provide an outline of our intent in this development.

Direct-drive is generally considered to be for DJ use, and belt drive is for Hi-Fi use. In the 1970s, when Technics invented direct-drive turntables, their performance and reliability were first recognised by broadcast stations. High acclaim was then received by audiophiles. The high-precision rotation and absence of S/N ratio degradation were particularly attractive to these users. The high torque and reliability of direct-drive were recognised by DJs, and direct-drive turntables became the standard in the club scene.

Technics was also a leader in incorporating innovations, such as vibration-damping materials, cabinet construction, and insulators. Having inherited the DNA of Technics, we do not wish to merely make a replica of the SL-1200.

In other words, our intent in this development is to redefine the direct-drive turntable reference.

Conventional analogue turntables have problems with degradation in sound quality caused by factors such as minute speed vibration during rotation and rotation irregularity called "cogging." In the SL-1200GAE, the use of a newly developed coreless direct-drive motor with no iron core eliminates cogging. Also, the twin-rotor construction reduces the bearing load while maintaining high torque, and also reduces minute vibration during rotation. These factors enable reproduction of the warm, exquisitely detailed sound etched on analogue records.

The application of motor control technology developed for Blu-ray devices, and switching the drive mode depending on the operational status of the motor achieve a high starting torque and high speed stability.

The tonearm employs lightweight magnesium which has a high damping effect, with cold drawing improving the characteristics of the material and achieving the high-precision required. In addition, high initial-motion sensitivity is attained by employing the traditional Technics gimbal suspension construction with horizontal rotation axis and the vertical rotation axis intersecting at a single central point, as well as high-precision bearings using a cut-processed housing.

The use of brass-milled and gold-plated phono terminals and ground terminals prevents degradation in sound quality while enabling the easy attaching and detaching of cables. Also theuse of metal shielding construction inside the case reduces the effects of external noise.

When the weight distribution of the turntable is uneven, excess vibration or noise occurs during rotation, which causes degradation in sound quality. Therefore, the balance of the turntable is adjusted at the factory by using specialised high-precision balance adjustment equipment for each and every item after the turntable is assembled. Turntables that have undergone adjustment are labelled with a sticker reading "BALANCED" to indicate that adjustment has been done.

The turntable has a three-layered construction with a rigidly combined brass and aluminium diecast platter. With a deadening rubber covering its entire rear surface to eliminate unnecessary resonance, thereby achieving high rigidity and vibration damping. This delivers smooth rotational stability and inertial mass surpassing the SP-10MK2, the direct-drive turntable standard used by broadcast stations worldwide, as well as having more than twice the inertial mass of the SL-1200MK5.