Stanton announced a new version of its FinalScratch® Records. These special time-coded records are an improved version of the previous “Thin” (Scratch) and “Thick” (Standard) vinyl records, which let DJs manipulate digital audio files from turntables using FinalScratch hardware and software. The main difference between the old records and the new version is that time-code is now pressed at the very beginning of each track (the “lead-in” grooves) for better tracking and response. 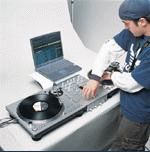 With the release of Traktor FinalScratch version 1.5, Stanton and Native Instruments introduced a new feature called “Lead-In Graphics.” This graphic displays the amount of time that must pass before the needle reaches the start of the audio file. When used with the new FinalScratch records, users can get a true visual representation of where the needle is in relationship to the start of the track. This is because time-code is now pressed in the lead-in grooves. One benefit is a significant reduction of audio hiccups when a track starts, since the needle has more time to calibrate to the timecode. And if the needle were to skip, users can see exactly where in the audio file the needle ends up instead of having to wait for the timecode to re-calibrate.

The new FinalScratch Scratch records will be available as an accessory at authorized Stanton dealers soon.