Stanton DJ, an industry leader in the design and manufacture of professional audio products for DJs, Live Sound Reinforcement and install applications, today announces the launch of the SC System, the company’s new set of digital controllers for the professional DJ. The Stanton SC System is comprised of the SCS.1d deck and the SCS.1m mixer; both advanced control surfaces that give the digital DJ an entirely new level of performance ability and functionality, while preserving the comfortable feel and familiar layout of more traditional equipment.

Due to increased portability of laptops, processing power, massive song storage, and rapid advances in DJ software, digital DJs are becoming more prevalent than ever, and require dedicated, practical control surfaces that give them total control over their music and performance. The Stanton SC System is a high-end controller solution that can be a direct replacement (or even compliment) to the high-end DJ gear and popular software options that exist today. Each component of the system (mixer and deck) can be used standalone or together, allowing for multiple configurations, with clean lines drawn between the functions of each unit. This system boasts a premium feature set including built-in FireWire (tm) connections, a high-torque motorized platter with vinyl control disc, motorized fader, rotary encoders, massive flexibility, and integration into DJ software with advanced two-way feedback.

Stanton’s Product Development Director Jim Mazur commented, “In creating the SC system, we took a clean approach towards not just designing a piece of equipment, but rather creating a physical palette of familiar and comfortable controls with expandability to allow the end user and software to grow as technology advances. While most musical instruments have been well defined and morphed throughout time, DJ gear is still evolving and we are all still searching for the culmination of functionality and interface to allow the artist to not feel confined by how others want them to use their gear. Computers have opened the door of creative opportunity for the artist, and at Stanton we want to continue to create the right gear to facilitate artistic expression through music.”

Key features of the Stanton SC System include…

· Highly tactile and complete user feedback (out of the box)

· Encoder section for control of rotary controls in software 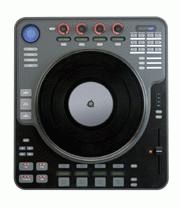 The SCS.1d offers a tight grip over the DJ’s music through a high-torque 10” motorized platter, transport controls, navigation keys, rotary encoders, a motorized pitch slider, and a trigger section. Unlike the SCS.1m, the SCS.1d Deck does not offer any direct audio connectivity; all audio I/O remains at the mixer or external soundcard to reduce cabling. What the SCS.1d does offer is top of the line tracking and intuitive ergonomics, accented by a real 10” disc of vinyl for authentic feel.

The SCS.1d features 4 virtual encoders each with LED rings and an alphanumeric display. The LED rings provide visual feedback for the current position of the knob providing instant positional feedback in low light environments and when switching between multiple presets. The alphanumeric displays indicate the name of the current function mapped to the encoder. This is important as these names are updated when different presets are loaded from the preset section.

All functions on the encoder can be instantly mapped to the motorized platter by using the “JOG” button below the encoder.

Control Presets for Encoders and Triggers

SCS.1d features 6 control presets for the encoder rings allowing for a total of 24 knobs to be mapped to the deck control surface alone! Presets allow for multiple functions to be mapped to a set of controls. Each preset maintains its state so the controls are never “reset”.

The pitch slider on the SCS.1d is not only 100mm long for super smooth pitch adjustment. It is also motorized so the deck can remember several virtual decks’ fader positions. The motorized pitch slider can be automatically brought to perfect sync position when working with software that is able to communicate with the interface when doing a sync function.

The trigger pads on the SCS1.d are velocity sensitive so they not only provide button press information but also velocity strength when the trigger is pressed. In this way samples can be triggered at different volumes based upon how hard the buttons are pressed with pressure sensitive interface messages. 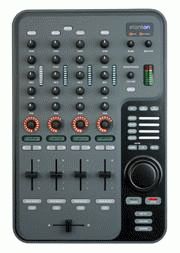 The SCS.1m is an analogy in design to a traditional 4 channel dj mixer. It features 4 channel strips equipped with Gain, Hi, Mid, Low, and Pan controls as well as up faders and a cross fader. The SCS.1m controller also has 4 encoders exactly like the SCS.1d. On the rear panel the SCS.1m has full audio connectivity for Dj software. The unit can connect to the mains via balanced connectors and has a microphone input and aux input that is phono / line switchable. Monitoring is achieved through the headphone outputs on the front panel.

The SCS.1m also includes a footswitch input which allows the user to free up their hands while performing.

The mixer acts as an audio interface for the SC System, and multiple channels of audio can be used with it. By utilizing the Firewire protocol the SCS.1m ensures low latency audio to and from the PC (1.5ms) and high sampling rates (up to 96KHz). This means that high definition audio can be used seamlessly with the unit, and that there is virtually no delay between a control movement on the surface and a response from the computer.

While the SCS.1d represents a merge of all the highest quality components and controls found on high end cd players and turntables, the SCS.1m offers the same comparison to high end mixing boards. The unit offers 4 channel strips of control so 4 virtual decks can be mixed together in real time.

The encoder strip is designed to match the similar encoder strip on the SCS.1d. In this way, there is a common user interface between performing with control presets on the mixer and the deck. The only difference between the respective encoder strips on the mixer and deck is the fact that the strips on the mixer can be used in a matrix fashion. This means that either one channel strip has 4 encoder controls, or there is one common control between the 4 encoders. For example, while running an effect on one channel, the DJ may require more control for that effect and would choose to run all 4 controls dedicated to the one channel. On the other hand, a DJ may want a more generic control that can be mapped across each channel such as pan / balance. With 4 presets per encoder knob, the SCS.1m allows for up to 12 knobs of control into the software.

For more information on the Stanton SC System visit www.enterthesystem.com, or to view a complete catalog of Stanton’s products visit www.stantondj.com.