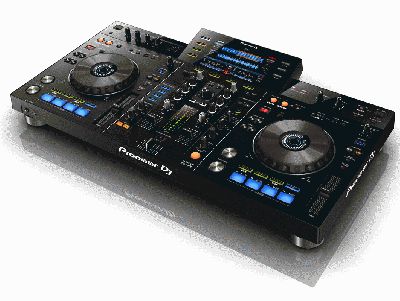 XDJ-RX Mixes Together Two Players, a Mixer and Large Monitor for Use with rekordbox

“Pioneer’s XDJ-RX can stand on its own as a full-blown yet portable DJ system without the need for a separate computer, and with the built-in monitor, all you need is a USB device filled with your music,” said David Arevalo, marketing director, Professional Sound and Visual Division for Pioneer Electronics (USA) Inc.  “Best of all, you can prepare your music in our rekordbox software so all you need to do is plug in the console to an existing audio setup and you’re off and playing.”

The XDJ-RX features a high-resolution 7-inch LCD color monitor located on the top center of the console to display an array of music information.

·        Wave and Wave Zoom – During music playback, the entire waveform of the music from each deck can be viewed simultaneously on the screen.  Users can also change the resolution of the waveforms with a turn of the rotary knob, providing five levels of Wave Zoom to show the details of the music transitions.

·        Beat Count – Accurately displays the number of beats until a set point.

The XDJ-RX follows a similar layout as Pioneer’s flagship models and offers similar functions and operability.

·        Hot Cue – Enables instant playback of a set point in the music.  Each player can set four Hot Cue points.

·        Auto Beat Loop – Performs a loop play by automatically setting loop-out points from the BPM of the music.

The XDJ-RX includes Pioneer’s rekordbox music management software for advanced preparation of music.  Available in versions for Mac® and PC, users can configure, edit, and save a history of music sets.  For added convenience, Pioneer also offers the rekordbox App, which enables users to prepare and manage music stored on their portable devices as well as analyze music via Wave Zoom, key, wave, beat grid, BPM, and ID3 Tag, create playlists, active loops, cue/loop points and beat location settings, and save playback logs of music. The App is compatible with iOS and Android™ devices and is available at no charge in the App Store or Google Play.

The XDJ-RX features two built-in USB ports for connection of multiple music sources.  In addition, the unit can record music sessions onto a connected USB device, saved in WAV format for future playback. For maximum versatility, the mixer section can be used as a standalone 2-channel mixer for use with external players and turntables.

·        My Settings – The function settings of a player can be saved to an iPhone, iPad or iPod touch or USB storage device.  For additional convenience, the settings can also be made on the rekordbox App or software, giving users the ability to switch to their settings when connecting to a CDJ-900NXS or CDJ-2000NXS

·        Traffic Light – Utilizing a multi-player PRO DJ LINK connection, a green light indicates that music will sound harmonious with the key of the music being played

·        Auto Standby – Automatically senses active operation and the presence of input signals, switching to standby mode when inputs are not detected for a long period