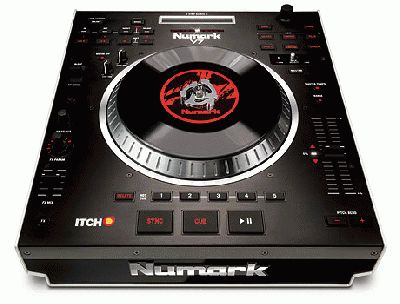 V7 is the turntable for today’s DJ. V7 delivers outstanding feel and unprecedented power in a single-platter digital DJ controller. V7 is based around the acclaimed adjustable torque, motorized-platter design from Numark's NS7 and delivers a host of professional features including real vinyl and a slipmat that analog turntablists will love, ultra-precise turntable control, effects controls, mouse-less library navigation, and Strip Search virtual-needle drop. V7’s link function enables DJs to combine one or two V7s with their favorite mixer and their Mac or PC for a completely customizable, totally seamless performance environment.

V7 is the modern DJ’s answer to CD players skipping and vinyl and needles wearing out. VJ users enjoy the feel they prefer and the mixer of their choice, while enjoying the power and capabilities of next-generation technology.

V7 contains a full compliment of effects controls, which enables DJs to access the same effects as in Numark’s NSFX. V7 includes a professional 24-bit audio interface that supports dual decks. It is outfitted with premium faders, knobs and buttons including controls for selecting tracks and blending audio effects in the included Serato ITCH software.

This motorized turntable controller employs the proven, cutting-edge control technology pioneered by Numark in NS7, in which turntable and control information in exchanged at more than ten times standard MIDI resolution. This massive data stream creates the rock-solid, virtually latency-free control for which DJs worldwide have hailed NS7. Because V7’s communication is based upon MIDI, it is MIDI compatible, and therefore DJs can use it with a variety of MIDI software.

DJs will find that they virtually never need to touch their mouse when performing or preparing sets with V7. Extensive track-access, loop and cue controls keep the DJ’s hands and eyes away from the computer.

V7 will be available from musical instrument and DJ retailers in Q1 2010.