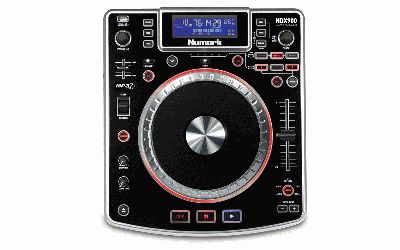 Based upon the popular NDX800 controller, the NDX900 DJ controller is capable of mixing music from virtually any digital source including a computer, CDs, MP3 CDs, or even USB flash drives. NDX900 has a layout that is recognizable to DJs everywhere with a large, seven-inch touch-sensitive illuminated platter, smooth, frontloading CD drive, top-facing USB DJ controller port, powerful remixing, looping, and sampling capabilities, all in a chassis that has a solid feel and professional look. NDX900’s Beat-synced DSP effects include chop, echo, filter, flanger, pan, and phaser.

NDX900's built-in audio interface works plug-and-play, allowing DJs to seamlessly integrate NDX900 with practically any computer and control virtually any DJ software. No drivers or external sound cards are required. With two NDX900s and a mixer of choice, DJs have a powerful and versatile digital DJ rig.

NDX900 includes Traktor LE 2 DJ Software and comes premapped for use with a variety of DJ software including Virtual DJ and is compatible with almost any MIDI compatible DJ software.