Denon DJ is proud to announce its DN-S1000 CD/MP3 player has been named Best DJ Product at the Club World Awards 2005. Now in its third year, the Club World Awards recognize innovation in design, technology, sound and talent across nightclubs in North America. The awards — also known as the “Disco Globes” after their mirror ball trophies — honor the hottest, newest, most cutting-edge products and the DJs, promoters and proprietors who strive to bring the public the ultimate clubbing experiences. The winners of the Club World Awards are determined by an independent panel of expert judges, and were announced at the Club World Awards ceremony held during the Winter Music Conference in Miami, Florida.

This award comes on the heels of Denon DJ receiving accolades from two other notable industry associations for its cutting-edge DJ products: at the DJ Magazine Technoscan Awards, Denon’s DN-D4000 Dual CD/MP3 Player won top honors in the category of Best Dual CD Player, while the DN-S1000 CD/MP3 player and DN-X100 “battle” mixer have both been awarded with the Good Design 2004 designation by the prestigious Japan Industrial Design Promotion Organization (JIDPO). 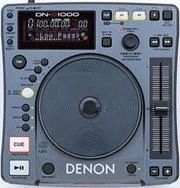 Commenting on the Club World Awards win, Peter Papageorge, Director of Sales and Marketing for D&M Professional (Denon DJ’s parent company), stated, “To receive accolades from the people who actually use our products is always the highest form of recognition, and winning Best DJ Product at the 2005 Club World Awards exemplifies just that. We are extremely proud of this latest award and look forward to offering DJs ever more impressive tools to further their art.”

About the DN-S1000 CD/MP3 Player
Denon DJ’s new DN-S1000 Compact CD/MP3 player is designed to offer many of the same high-end features and benefits of the company’s tabletop DN-S3000 in a compact, easily portable package. The DN-S1000 features a pressure sensitive platter that can be used to mix, scratch, backspin, brake, search and otherwise manipulate as if it were an analog turntable.

The feature-rich CD/MP3 player fits all the requirements of today’s working DJs, from mobile DJs, to club and international DJs and novices. In addition to advanced MP3 functionality, the DN-S1000 includes essential onboard effects such as Scratch, Reverse, Brake, Filter, Flanger and the world’s first Echo Loop, which can loop a 1/4 beat up to a 8/1 beat indefinitely, allowing a DJ to overlay another track or even a new disc for a seamless crossfade mix. Other useful features include: 2 seamless loops, B-point loop trim, user-definable paper slipmats and a
3-way BPM counter (Automatic, Tapping, Manual). Additionally, with features such as Fast Search/Manual Search and Quick Jump, the DN-S1000 makes searching fast and easy, enabling DJs to literally “jump” around within a CD or MP3 track using precise adjustable increment time steps.

For the ultimate in control and “feel” during live performance, a special Platter Hold function allows Pitch Bend by the scratch disc of up to ±100%. Additionally, ID3 tags are supported for MP3 files, which allow the user to view the Artist, Album and Title of a particular file. A real-time Instant Start (0.02 seconds) playback mechanism and 20-second Shock Proof Memory ensure instant audio playback and uninterrupted performance. A 100 mm long stroke pitch slider with center click for playback speed control adds even more performance flexibility and creative control. In addition, the DN-S1000 includes a Fader Start Control terminal that’s compatible with all Denon DJ mixers, and 14 customizable preset functions allow DJs to tailor functionality to their individual needs.

The DN-S1000 also features another world’s first from Denon, Next Track Reserve with Crossfade. With the capability to store hundreds of MP3 files on one CD, Next Track Reserve now makes it easy for DJs to crossfade to another song within the same disc for a smooth non-stop mix. The crossfade time is user adjustable.