Beamz - Freekin’ Lasers In The Mix! 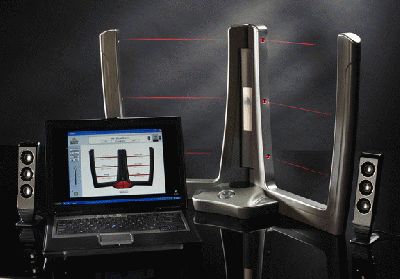 Always looking for something unique and a fan of gadgets and cool inventions that have something to do with games or music, I was thrilled when a big box showed up from Beamz. The Beamz unit is a heavy duty well built midi style musical instrument that even someone with no musical skills like myself can make some cool music with. To do so, I just placed my hands between any one of the six laser beams that extend from one side of the W shaped unit to the other. By interrupting the light source from reaching the other side, you can create different sounds from each beam.

With the recent release of Beamz Studio software they turned the laser musical unit into a midi player and controller that DJs can assign to different effects, sounds and loops. This part of the software makes it so DJs that are working on their own music mixes can perform it in their studio or live in front of the crowd. It’s like having a laser based sampler for audio!

For most disc jockeys, the above portion of the functionality is not as important as the use of songs that they regularly play and want to add a cool extra mix to. While the current available library of pre-done tracks is only at around 100 or so, it includes favorites that DJs play on a regular basis such as Funky Town, Get Ready For This, a great mixable version of Billy Jean by Michael Jackson, In Da Club, Ice Ice Baby/Under Pressure, and Just Dance by Lady Gaga. Earlier this year, Beamz Interactive signed a deal with Sound Choice distribution which will get plenty more tracks into their library within the next couple months. This will allow you to pop samples in and create your own mix live at the event and make a show out of it for the school dance attendees where I can see the popularity of this being strongest. The system comes with 30 original songs plus a coupon good for 5 additional free songs upon registration of the unit online.

The Beamz is available in a both a consumer ($199.95) and professional version ($299.95). The only difference is that the pro version includes the new studio software, which allows musicians and DJs to compose their own interactive music from existing midi, wav and mp3 libraries

Overall a very well built unit with software to match it. The growth and the adoption of this unit as a performance piece for club/remix and mobile DJs really will depend on the growth of the library of tracks and effects. Stay tuned!