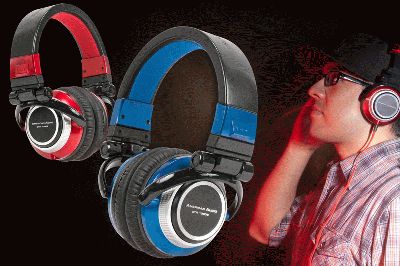 As a DJ, your colorful personality is an important part of your performance – and now American Audio is giving you a way to brighten your image and express your flair from the “top” down with the new ETR 1000 headphones. Brightly colored and highly stylized, these distinctive DJ headphones, available in bold blue (ETR 1000B) and racy red (ETR 1000R), will add star power to any entertainer’s performance from the moment you put them on.

But the ETR 1000s’ beauty is more than skin deep. Designed exclusively for American Audio by former DMC champion Edgar (DJ Etronik) Bernal, these high-power headphones’ colorful good looks are matched by their outstanding performance.  Everything about the ETR 1000s has been designed with careful attention to the details and features that matter most to working DJs by “one of their own.”

For starters, the ETR 1000s feature 2500mW of power, a 40 mm driver, and a dynamic range for great highs and lows.  They provide a lot of frequency output and good bass without being overwhelming, which helps for mixing, not to mention enhancing DJs’ own listening pleasure.

Not only do the ETR 1000 headphones look and sound good, they feel good too. Rugged and sturdy, they feature plush leather padding for the utmost in comfort, even when worn for hours on end.  Additionally, because they were designed to cover the entire ear, they cancel nearly all outside sound for superior noise isolating music monitoring. Their flexible housing allows for double or single ear monitoring, so they can adapt to any DJ’s personal preference.

“One look at the ETR 1000s will tell you that these are truly distinctive and different headphones. But as good-looking as they are, they’re about much more than image,” said Tom Freret, national sales manager for American Audio.  “When designing them, we called upon the expertise of DJ Etronik, who’s performed thousands of gigs and probably knows more about DJing and stage presence than anyone I’ve ever dealt with. He contributed his ideas to our R&D team about what DJs really want in headphones. Etronik ended up being so impressed with the finished product that he even lent his name to the headphones – ETR!”

Another feature working DJs and mobile entertainers want in headphones is ease of use and portability – and here too, the ETR 1000s deliver. They come with a 5 ft./1.5M straight, lightweight cable that is tangle-free, allowing DJs to move freely without the hassle of snarled cords. Additionally the headphones fold up and even include their own carrying bag for safe and easy transport.

Along with this total package of appearance, performance, comfort and usability, the ETR 1000 headphones offer something else that DJs will appreciate – a break for their wallets. The MSRP of the ETR 1000B (blue) headphones is just $99.95, and that of the ETR 1000R (red) headphones is also $99.95.  More colors will be introduced to the ETR headphone series in the future.