Following the success of its KAOSS Pad Dynamic Effect/Controller, Korg is introducing the KAOSS entrancer. This unique hybrid controller brings real-time, fingertip control over visual effects for the first time, while retaining the same audio effect processing and sampling as the KAOSS Pad. It's ideal for the VJ, DJ, club, or electronica artist looking for cutting edge video and audio manipulation during live performance. 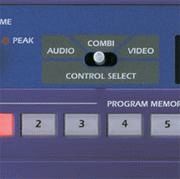 The KAOSS entrancer provides real-time control over digital effects processing for both audio and video sources, either together or separately. Users move their finger along the X/Y pad to control the way in which effects are applied. This touch (or sweep) of a finger allows a multitude of parameters to be manipulated, for easy synchronization of the video and the audio while creating advanced audio and video effects changes. These capabilities provide more intuitive control over real-time visual effects than the current range of VJ software and hardware available in the market.

A library of 100 video effects programs is provided for control over the user's video material. It offers basic effects such as fade, wipe, color change, freeze, flip, rotate, and expand/shrink, and more sophisticated effects such as stretch, split-screen, invert image components, mirroring, and emboss. Audio signals are processed with the same 100 effects found in the second-generation KAOSS Pad. Audio and video can be processed at the same time by using the 100 specially-designed Combination programs. The user can also sample audio (up to 12 seconds) and video (up to 6 seconds) independently, then save the images/samples for play back, or apply effects to them.

The KAOSS entrancer accepts two video signals (composite or S-Video) and stereo audio input, with the ability to switch between the two video inputs. It has MIDI In and Out for controlling other devices and for playback of sequencing pad movements. Other features include:
· Auto BPM and Tap Tempo control
· Mute/Freeze switch
· Eight "favorites" buttons for instant access to effects programs
· Audio and Video sample playback from the pad for scratching effects
· RCA audio inputs/outputs