Stanton has announced the new SA-5 Professional Turntablist Mixer. This 2-channel battle mixer uses custom Penny & Giles line faders and crossfaders giving DJs more natural control during heated turntable competitions. The SA-5 is also the official mixer of the Allies All-Star Beatdown. The SA-5 was designed from the ground up for lightning-fast control and extremely quiet operation by Stanton's new engineering team, in close partnership with the Allies. 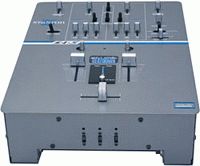 Stanton gave special consideration to the placement of each slider and switch. For example, each of the reverse switches are now located on the top panel where they are less likely to be bumped. Even the headphone jacks have been moved out of the way to a new recessed area. Custom Penny & Giles faders--with curve adjustment--give DJs smooth operation that can be tailored to their preferences.

Connections to the SA-5 include two Headphone outputs (1/4" and 1/8" minijack) with a Headphone Mute switch, two Phono and two Line inputs, a Session input and Microphone input, and professional TRS balanced Master outputs.

For more information, visit their web site at www.stantondj.com.