“We’re challenging the status quo by offering more products, better samples, and far more control over the sound than our competitors — all with the pristine sonic quality for which Waves is known,” commented Waves CEO Gilad Keren.

Waves first shook up the convolution reverb market with last year’s introduction of the original IR-1, the only sampling reverb to offer traditional reverb controls that affect the impulse response sample itself rather than just filtering the resulting sound. This approach retains the sample’s signature sound but allows much more flexible use than with conventional convolution reverbs. IR-360 is now the first surround sound convolution reverb to offer this control, and both IR-360 and IR-1 Version 2 now include newly added controls for even greater customization.

The setting of each environmental parameter can generally be varied from 0.25 to 4 times its natural value. For example, the user can vary the RT60 (reverberation time) of an actual sampled space, and change the size of that space. There are options to shape the decay envelope to suit the application, change the reverb density, analyze the frequency response and derive the room nodes, use de-correlation to optimize the stereophonic character of the reverb, and add gain and pre-delay to each portion of the reverb curve, among other controls. Exclusive filtering techniques enable the damping to be precisely controlled, while a 4-band parametric EQ allows tone adjustment of the reverberation.

A new feature now lets IR-360 and IR-1 Version 2 users capture the sound of acoustic spaces and hardware devices by playing an included sweep signal into an acoustic space or through an outboard processor and recording the result. The software then lets users import the recording to create a custom impulse response that’s ready to use.

Samples of actual environments in the newly expanded library employ a unique combination of microphone array, including ORTF, and Soundfield microphones mounted on a computer-controlled turntable, for accuracy and realism. Venues included well-known spaces such as the Sydney Opera House, Rome’s Santa Cecilia Concert Hall, Manhattan’s Birdland jazz club, and many more. Each was sampled from multiple locations, at 96 kHz and 32-bit floating point for maximum resolution, dynamic range, and SNR. 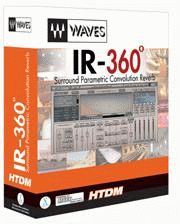 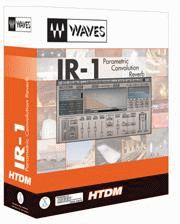 The IR-1 Version 2
IR-1 has been upgraded to Version 2, with both HTDM and Native versions. Among other new features, Version 2 offers a Convolution Start Control, allowing users to trim the beginning of a sample to eliminate unwanted predelay; an ER (Early Reflections) Buildup Control for adjusting the buildup slope of early reflections to control the attack sound of the transients; and a Dry Gain Mode that offers adjustment of the wet and dry signal gains separately instead of mixing between them as with the traditional dry/wet control. 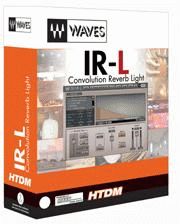 The IR-L
The entry level plug-in is IR-L, which uses the same convolution engine and samples but with a more basic feature set. It can be upgraded to either the IR-1 or IR-360. IR-L is available in two versions: Native and HTDM. Controls include Reverb Time with a ratio of 1:0.25; Convolution Start/Length controls; Direct in/out; Global pre-delay to all IR components; Latency display and Dry delay; Dry/wet control; Crosstalk; Output; and graphical display of IR properties.

In addition to the new releases, Waves is debuting a set of IR libraries on DVD, with improved sound and additional miking options as well as surround versions for most sampled venues. A new library preset handling system will organize presets dynamically by scanning the preset folder and developing menu contents based on its findings. Existing and old IR libraries will be supported.

www.Acoustics.net
In conjunction with the product line expansion, Waves unveiled a new web site, www.Acoustics.net, which will enable users to upload, download and exchange IRs they have created along with providing access to papers and other information on the technology behind the system. The site will act as a repository for the captured impulse responses of historic and important acoustic environments, preserving them for posterity as originally proposed by the late Michael Gerzon at an AES forum almost 30 years ago (several Waves products and technologies employ research by Michael Gerzon, such as Ambisonics). In addition, Professor Angelo Farina of the University of Parma, Italy, has been deeply involved in this technology, contributing his vast experience in sampling acoustics to the IR development team.