Built from the ground up with DJs in mind, the Conectiv 16-bit/48kHz audio interface offers easy USB connectivity that transforms PCs and Macs into complete DJ production and performance solutions. The two large mix knobs allow users to mix the incoming audio from a turntable or CD player with the output of a connected computer. Conectiv also includes standard DJ cueing capabilities, enabling users to listen to a track in the headphones before sending it out to the house system. 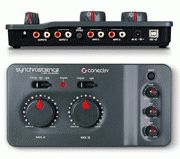 Conectiv also ships with Torq, the new DJ software that is the cornerstone of the entire SynchroScience product line. This dual-platform DJ application allows users to mix, beat-match and cue a variety of digital audio file formats, including MP3, AIFF, WAV, WMA and AAC. The software automatically configures itself to work with Conectiv, making set-up extremely easy. Furthermore, Torq can be controlled via mouse, keyboard, MIDI controller or control vinyl/CDs. The program also organizes a user’s digital files into a quickly searchable database. And for additional sound shaping and performance options, Torq supports third-party VST effect plug-ins and includes both a dedicated sampler and performance recorder.

The combination of Conectiv and Torq lets DJs work in any manner in which they are comfortable. The program’s ability to organize and play a host of digital files in a variety of formats paves the way for totally digital performance and production. For the DJ who chooses to rely on vinyl or CDs, Conectiv can turn a laptop into an extremely versatile multi-effects unit for the output of a connected turntable or CD player. Users can even create a hybrid digital/vinyl DJ rig by using Conectiv and Torq with M-Audio’s specially encoded control vinyl discs or CDs.

“The formation of M-Audio’s SynchroScience group demonstrates our commitment to creating products by DJs for DJs,” says Adam Castillo, marketing director at M-Audio. “Conectiv and Torq deliver the kind flexible power that DJs demand, along with new twists that will propel the art into unexplored territories. With this very affordable combination, all a DJ needs is a computer and set of headphones, and they’re ready to start mixing tracks any way they want. DJs can use Conectiv and Torq as a stand-alone digital system—including control vinyl or CD control—or for multi-effects processing of traditional sources. It’s the kind of tool that grows with you while expanding your potential.”

Conectiv is expected to ship in August with an MSRP of $299.95. Torq is included free with Conectiv and future SynchroScience products. Conectiv will also be sold as package including two control vinyl discs and two control CDs for an MSRP of $349.95 (Torq included)."