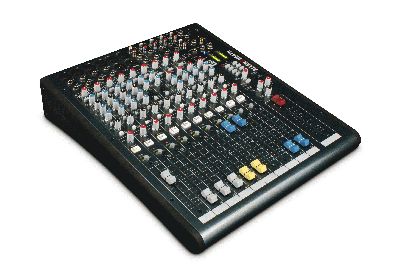 British mixer manufacturer, Allen & Heath, will be showcasing a selection of its products from the iLive digital series and its dedicated broadcast and recording mixers at the AES London in May 2010.

A highlight will be the iDR-16 3U MixRack and iLive-R72 rackmountable control surface, which together provide a space saving, lightweight digital live mixing system, bringing the same power, sonic performance and flexibility of the larger touring iLive systems to a significantly lower price point.

With these additions, the iLive Series now includes a total of 7 Surface and 5 MixRack variants, which can be mixed and matched in any combination, and share the same firmware, so that show files are transferable between systems via a USB key.. Other hardware configurations will be available for demo, with a range of networking options for EtherSound, MADI, ADAT and Aviom.

Also on display will be the XB-14 compact broadcast mixer, designed for a broad range of applications from small radio or internet broadcast studios, to hospital radio, university radio, community radio and larger studios with multiple rooms. The XB-14 is equipped with a wealth of features specifically for broadcasters, including Telco inputs for telephone callers, mic fader open sensing for external connection and internal automatic muting of the speaker outputs, stereo channel start/cue outputs for CD deck transport control, multiple headphone outputs, and an additional stereo bus (Mix B).

Finally, the ZED-R16 dedicated recording mixer will be on show, which combines Firewire with multi-mode MIDI/audio faders, MIDI controls and ‘home-studio’ routing, enabling the user to build tracks in the studio or record a live gig, mix-down and remix.