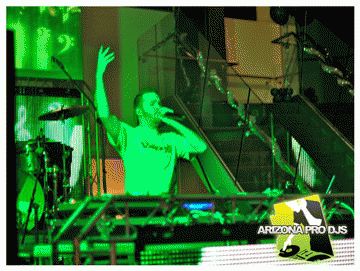 About seven years ago, the internet radio station DJ Will Curran started in his freshman year of high school got to be “too big for the paycheck,” so he took some money he had saved and purchased his own equipment. Soon his friends were begging the teen to DJ at their parties, even though he knew little about Top-40 and Hip Hop music. Will’s first event as a DJ was a friend's backyard party, using home stereo speakers and with a friend telling him what songs to play next.

From those beginnings, Arizona Pro DJs was born. For the last five years, “DJ Will See” and his DJs have been providing services for teen events such as sweet 16’s, bar and bat mitzvahs, school dances and dance parties, all over the state of Arizona. “One day I’ll be in the desert, and the next day I’ll be covered in snow,” Will says. “I’ve also done a few events outside of Arizona, including the X-Games 16 in Los Angeles.”

Will’s love of technology drew him to the tech and gear side of the DJ profession, but his love of music was the ultimate attraction and the driving force behind his decision to become a professional DJ. “Just playing music I loved was the best part,” Will says. “Now I just love entertaining the crowd.”

People at his events love Will’s high-energy style, but it usually leaves him exhausted by the end of the night. That doesn’t bother him, however, and he considers it a small price to pay for electrifying the crowds. “I am extremely high energy,” Will says. “You can always catch me jumping, throwing my hands up, throwing glow sticks out to people and such. My favorite part of the night is hearing people cheer when I mix into the next song.”

Videos are also a part of Will’s repertoire, but you won’t find many typical music videos in his bag of crowd-pleasing tricks. “I’m not the guy who plays music and it just happens to have a video with it,” he says. “Rather, I make the video the focal point all night long. I love playing custom edits which mash up clips from movies, TV shows and YouTube clips. I am very crowd-interactive focused so I always try to entertain people beyond just playing music.”

His current equipment set up allows Will to have full touch control over his video, even though other DJs might consider it cumbersome. “I run the video out of my laptop,” he explains, “and split it so I have each of my video channels in my audio/video mixer, instead of applying effects to the master. It means I have about five boxes hidden under my laptop and it makes it more complicated than it could be. But I like it that way.”

Despite his young age, Will says he has had many memorable moments in his profession. One that is a personal favorite of his is the Arizona State University Undie Run. As Will explains, “it’s an event where 15,000 college students get together, take off their clothes, donate them all to charity, run a mile around campus and then celebrate. The best part is we end up clothing thousands of people and have a good time doing it.”

As the owner and president of Arizona Pro DJs, Will employs about a dozen people, and his duties include event planning and sales, and as a self-described “marketing nut,” Will is always seeking out new ways to market his business. Will is also a full-time college student in his senior year at Arizona State University, and while juggling a business and college courses doesn’t leave him with much free time, Will loves longboarding (a sport similar to skateboarding) and playing the video game, Call of Duty, whenever he gets a chance.

When asked to choose what he believes is his proudest moment as a DJ, Will says he has so many it is hard for him to choose just one. “Whenever I perform at a new event or a different client, I love to hear their positive feedback at the end of the night. I love hearing people talk about you behind your back, like ‘Oh my God, the prom DJ was AWESOME!’”

Check out these links for more...