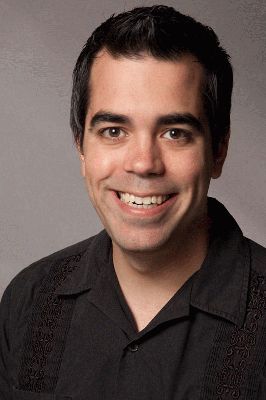 American DJ’s Chuck Green will soon be trading in his “Sales Representative” title for his all-new and strangely similar job title of “International Sales Representative for Asia and Canada”. The company is thrilled to promote its esteemed family member to his new prestigious position within the company. His sales calls may require longer plane rides and the occasional language translation literature, but it is sure to open up a whole new world that will reap many rewarding experiences for both Chuck and American DJ.

Chuck is ecstatic with his new job title, saying , “I'm extremely excited and optimistic about my new position. I am looking forward to becoming part of our stellar international team here at American DJ.” The American DJ brand is already widely known and respected around the world, but implementing Chuck’s vast expertise will bring even more technical and sales support to his new territories. The day-to-day responsibilities that come with his new title will not vary too much from his current routine; he knows to now expect the occasional currency conversion and he will definitely see an increase in the quantity of goods being shipped.

Fans of Chuck Green’s wildly popular web series, “Under the Hood”, need not fear; he will still be appearing in the highly entertaining and enlightening webisodes that draw in tens of thousands of viewers. Chuck relishes the opportunity to draw from the new experiences he will encounter while traveling outside of the country, so he knows that seeing how ADJ products are used outside of the US could bring some fresh ideas to upcoming episodes of “Under the Hood”.
cott Davies, General Manager of the American DJ Group of Companies, is delighted to announce the promotion. Says Davies, “We are very excited to promote Chuck Green to his well-deserved new position within the company; his passion for music and his understanding of our vast family of products really embodies what American DJ is all about.”
As far as celebration, Chuck Green jokes, “I thought I would celebrate by combining my territories’ specialties, but none of my friends were into having sushi covered in maple syrup.” Instead, we’ll settle for a pint and this toast, “Here's to being the newest ADJ International Man of Mystery...and moving heads.”