DANCE FEVER On it's Way Back!!! 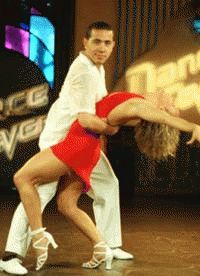 ABC Family's new summer series DANCE FEVER, a revitalized version of the popular variety show created by Merv Griffin ("Jeopardy!," "Wheel of Fortune"), launched with a two-hour premiere Sunday, July 13 (7:00 - 9:00 PM ET/PT) when viewers were introduced to the hundreds of hopefuls who auditioned across the country in hopes of realizing their dream.

The search is on to find America's best dancers and the ultimate DANCE FEVER individual or team champion, who will strut away with a $100,000 grand prize. Of these auditioners, only 48 individuals or teams will make it past the initial audition process and head to Las Vegas for their chance at dancing stardom. The Top 48 can consist of individual dancers, or teams of two-four dancers. DANCE FEVER will begin airing in its regular one-hour weekly timeslot Sunday, July 20 (7:00 - 8:00 PM ET/PT), when the 48 semi-finalists begin performing in the higher-level elimination rounds.

Once the elimination rounds begin in Las Vegas, the contestants will meet host Eric Nies, who was a roommate from the New York premiere season of MTV's "The Real World," and also the popular host of MTV's "The Grind." The contestants will also face, for the first time, the DANCE FEVER judges: actress and singer Carmen Electra ("Baywatch," "Starsky & Hutch"); Grammy-winning artist MC Hammer; and renowned director/choreographer Jamie King, who has worked with Madonna, Britney Spears and Ricky Martin.

Carmen Electra was born Tara Leigh Patrick in Cincinnati, Ohio. At the age of nine, she was selected to attend the School for Creative and Performing Arts, where she first took singing lessons, and by her teenage years, she was dancing in musicals and doing choreography for the school's theater ensemble. She eventually made the move to Los Angeles and got her first "boost" when she met Prince, who signed her to his Paisley Park Records label and released her first album. In 1996, Carmen hosted MTV's "Loveline," and later that year she was selected to replace Jenny McCarthy on the MTV show "Singled Out." In 1997, Carmen was signed on to replace Pamela Anderson on the hit syndicated series "Baywatch," and she had a memorable role in the feature film "Scary Movie" in 2000. Ms. Electra will next co-star in Warner Bros. Pictures' big-screen adaptation of the classic 1970s police action series "Starsky and Hutch" alongside Ben Stiller and Owen Wilson.

Known for his amazing dance talent and spectacular performances, as well as his flamboyant wardrobe and energetic personal style, MC Hammer is the winner of three Grammy Awards, eight American Music Awards, a People's Choice Award and a Diamond Award. He has sold over 30 million records, breaking down numerous doors for rap music and demonstrating that hip-hop had the potential for blockbuster success. This summer, he brings his considerable creative vision to ABC Family as a judge on the revitalized version of DANCE FEVER. Hammer was born Stanley Kirk Burrell and raised in Oakland, Calif. His first break came when he landed a job as a ball boy for the Oakland A's, where he entertained fans by dancing during game breaks and earned the nickname "Hammer" for his resemblance to all-time home run leader, "Hammerin'" Hank Aaron. Hammer began performing at local clubs and, with help from several of his athlete friends, started his own record label. In 1987, using the name MC Hammer, he recorded "Feel My Power" and impressed a Capitol Records executive with his elaborate live dance show and was signed to a multi-album deal. Hammer's 1988 triple-platinum debut, "Let's Get It Started," paved the way for his massive breakthrough effort, "Please Hammer, Don't Hurt 'Em," which sold 17 million units and established him as the most popular hip-hop artist of the era. The mega single "U Can't Touch This" was omnipresent in 1990, playing regularly on radio and MTV. For 1991's five-time platinum "2 Legit To Quit," Hammer dropped the "MC" from his name, but kept the trademark wholesome pop-rap sound, which had won over millions of fans worldwide. The single became his second big smash. In 1994, Hammer returned with a new platinum album, "The Funky Head Hunter." A new album, featuring the single "The Greatest Dancer," will be released in 2003.

Jamie King is one of the most sought-after director/choreographers in the business today, having worked with an impressive array of clients including Ricky Martin, Britney Spears, Shakira, and most recently, Madonna. Mr. King's career first took off in 1993 when he began a three-year collaboration with Prince, which led to an Emmy Award nomination for the Prince tribute performance on The American Music Awards. This achievement caught the eye of the biggest names in the music business and led to several successful projects with such artists as Salt-n-Pepper, En Vogue, The Smashing Pumpkins and Michael Jackson. In 1996, Madonna called upon Mr. King to co-conceptualize and choreograph her cutting edge music video, "Human Nature," which earned him nominations for an American Choreography Award and an MTV Video Music Award. Mr. King was then commissioned to choreograph the 68th Annual Academy Awards, making him the youngest person ever to receive this honor. In 1999, Jamie was asked to create and choreograph Ricky Martin's show stopping performance of "The Cup of Life" at the Grammy Awards, which prompted the evening's only spontaneous standing ovation and helped transform Ricky into a cultural icon. Mr. King has also worked closely with superstar Britney Spears, directing her 2000 World Tour "Oops I Did It Again," choreographing the music video "Stronger" and conceptualizing the pop diva's spectacular 2001 American Music Awards performance. Later that year, Madonna asked Mr. King to co-conceptualize and choreograph her music video "Don't Tell Me," which earned an MTV award nomination for Best Choreography. Mr. King also co-conceptualized Madonna's enormously successful 2001 "Drowned World Tour" and co-wrote her controversial "American Life" video. Mr. King recently choreographed Jennifer Lopez' video "I'm Glad" and will also direct her upcoming tour. Currently, Mr. King is directing Christina Aguliera's "Stripped Tour" and just finished co-producing VH1's highly-rated "Diva's Duets."