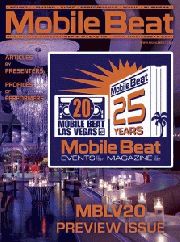 Why everyone should attend Dj Expos?
Jul 13, 2015 I am a self-admitted Dj Show/Expo junkie. I attended my first dj show in 1989 put on locally in the Chicagoland area by a Dj supply store. The show was covered by Robert Lindquist in the very first issue of Mobile Beat. By Keith KoKoruz.

Why Attend The LVDJ Show In Las Vegas?
Jun 21, 2015 Why now more than ever,  attending the LVDJ Show important. At the LVDJ Show, you will be enjoying the company of  like-minded  business owners that strive to take their investment in their business to the next level.

2015 TSE In Review
Jan 31, 2015 The staff of DJzone Magazine happened to be guests of the recent Special Event Show or TSE as they like to be called. The show was held in January at the Anaheim convention center

LDI 2014 Like a Fine Wine Reduction
Nov 30, 2014 Having covered the LDI Show for over 15 years, I would like to pull that culinary term out to describe what I witnessed just last week in Las Vegas.

The 2014 Las Vegas DJ Show Reviewed
Sep 30, 2014 Having ran a successful business for over 35 years and having attended almost every major DJ show, expo, and confab out there along with hundreds of conventions related and unrelated to our industry,

Canadian DJ Show Comes To Calgary
Mar 18, 2014 For the first time in its five years of being Canada’s premier trade event for DJs and producers, the Canadian DJ Show, presented by Pioneer DJ Canada, comes to Western Canada.

CHAUVET DJ AND TRUSST HOST PROFIT MAXIMIZING SEMINARS AT THE 2013 DJ EXPO
Jul 23, 2013 CHAUVET® DJ and TRUSST® present two seminars filled with tips to maximize profits at any mobile gig during the 2013 DJ Expo which takes place August 12 – 15 at the Trump Taj Mahal in Atlantic City.

The Las Vegas DJ Show A Gourmet Meal For DJs
Jun 25, 2013 I love going to DJ conferences. There is nothing cooler than being able to network with other DJs, to share with them something of value and to have an impact on someone's business.

has announced a new home and dateline for the PLASA Show in 2013. The UK's only international event for entertainment and installation technology will take place atExCeL London

Pizza, Pizzazz And Product Performance Make DJ Expo Rock
Aug 27, 2012 The good times rolled in Atlantic City for American DJ, American Audio and Global Truss America as we welcomed 1000+ DJs to the ADJ Customer Appreciation PizzaFest at DJ Expo. Aside from tasty food our guests were treated to a piping hot performance by DJ Etronik on the VMS4.1

Fantastic Lighting Seminar at Las Vegas DJ Show
Jul 3, 2012 Not only will those attending the Las Vegas DJ Show in September be able to see the latest in state-of-the-art DJ equipment from American DJ and American Audio, they will also have a chance to learn lighting tricks and techniques from one of the best in the business, Michael “DJ Mikey Mike” Susca.

CHAUVET® DJ PROMINENT PLAYER AT THE 2012 DJ EXPO
Jun 25, 2012 CHAUVET® DJ, a leading manufacturer of LED lighting, announces the sponsorship of major event components at The 2012 DJ Expo taking place August 13 – 16 at the Trump Taj Mahal in Atlantic City. For the first time in DJ Expo history, CHAUVET® DJ will have an enormous booth

American DJ Hosts Customer Appreciation PizzaFest At DJ Expo
Jun 14, 2012 No one wants to party on an empty stomach, which is why American DJ and American audio are holding a special event at DJ Expo in Atlantic City on  Tuesday August 14th. The companies will be inviting visitors to the show to break bread (and pizza) with them at the first annual ADJ Customer Appreciation PizzaFest at 6pm at the Grand Ballroom in the Trump Taj Mahal.