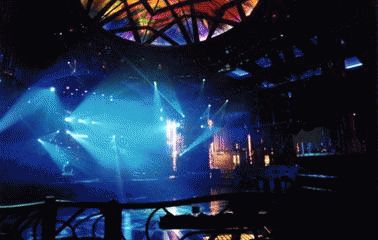 Club Ra, located in the Luxor Hotel's famous pyramid on the Las Vegas Strip, is not only one of the city´s most unique and hottest nightclubs, it has the respectable distinction of helping to bring true clubbing to Vegas.

Read more
There was a time when real clubbing could only be found in hotspots like Miami or New York, but since the opening of Ra several years ago, Las Vegas has quickly gained the reputation as a club mecca in the desert.

With an automated lightshow that features Martin MAC moving heads, along with a décor that you can only find in Vegas, Ra has become one of the leaders in the underground music scene.
Owner Billy Richardson envisioned Ra, appropriately named in honor of the Egyptian Sun God, as "ancient Egypt on steroids," and that description of the single-roomed club certainly applies.

Ra stands out from other clubs in many ways - aerial performers, brilliant architecture, and ultramodern Egyptian décor that includes a huge statue of falcon god Horus complete with laser beams shooting out of its eyes - but it's a striking light show and top quality sound that provides the club's energetic pulse.

The lightshow is central to the club's overall atmosphere. The 19,000-square-foot room features a circular dancefloor and arched proscenium stage above which hang 40 MAC 600 color changers and 26 MAC 500 profile spots. Complemented by other automated fixtures and conventionals, the MACs are used to illuminate both stage and dancefloor with color and pattern also projected onto the surrounding décor.

Ra covers the musical spectrum. International DJs such as Paul Van Dyk and Paul Oakenfold, acrobatic shows and pole dancers are all part of the allure on Wednesday's especially popular Pleasuredome evening.